Every once in a while i get bored and try to replicate some game elements i like from other games. So that’s what you are going to see in this thread.

In this video you’ll see Dishonored’s Blink, FarCry’s flamethrower(sets NPC’s and foliage on fire), Killzone: Shadow Fall scanner and dragon shout from Skyrim(with crappy particle effects ;P) And a melee system which currently sucks for lack of proper animations. Super easy stuff but it is fun.

Taken the postprocess material for the scanner from here, spear from here and grass from here if anyone wants them. Characters and animations are Mixamo’s free stuff.

More to come whenever i make the next thing.

Ha! I love the animation on the last 2 characters you set on fire… Do the twist!!

Cool stuff Jacky, the scanner & teleporter look like a lot of fun!

I really liked the teleporter, scanner and the dragon shout. Well done!

Thanks for sharing Jacky! You got a lot done! You could make a whole game with this!

I thought it would make more sense to use it then to make them stand still or go ragdoll while they burn. And yes, especially the teleporter is a lot of fun.

Looks amazing. replicating stuff is a nice way to go. But try to add your own flavor to it

Haha, awesome stuff ^^
Thanks for sharing it with us!

lol the burning animation is just too cool

Awesome ‘Boredom’ Level Jacky! Everyone needs one of these levels to work on new ideas but not forget the older ones. Keep up the great work! 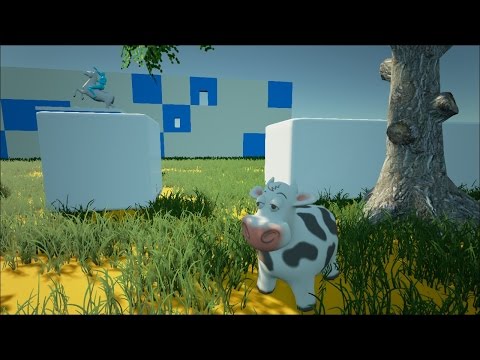 I’m a bit late to say it but thanks guys!

This time we have horse riding and flail swinging. I’ve always wanted to see flails in games like Skyrim, even though it is not practical as you will see in the video. 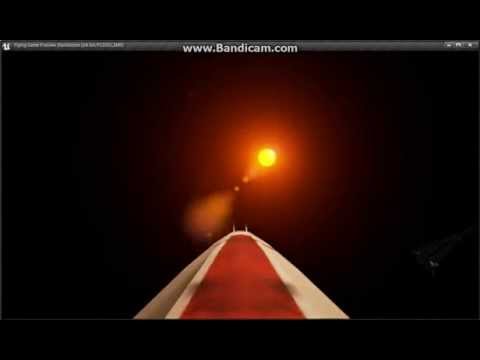 I meant to do this some months ago but physics thruster require you to place it exactly at center of mass so that it can thrust the object straight forward instead of making it spin like a headless chicken. And now that we can get CoM in blueprints i gave it another go. Every motion is driven with thrusters(6 in total right now.) It is more frustrating to control than i imagined though…definitely needs some sort of counter thruster system in order to make it more game-friendly. I can give the BP away later on if anyone needs such a setup.

Oh, and the Viper model is from here.

Wow the orientating model in the lower right is a great touch, and the craft itself looks like a lot of fun to pilot!

wow the viper is AMAZING. Impressive control skills. Just like the tv show! I can easily imagine controlling a viper to destroy resurrection ship vertically!

Great thread! It’s a real variety show of prototypes. Trying to replicate some small feature you enjoy is a great way to learn your way around the engine.

Wow the orientating model in the lower right is a great touch, and the craft itself looks like a lot of fun to pilot!

That orientation widget helps when there is a static platform in the level like this one; otherwise you may get dizzy quite fast! I’ve also added boost now, which improves the perception of speed and makes the ship more responsive.

I can easily imagine controlling a viper to destroy resurrection ship vertically!

Exactly what i was aiming for.

Great thread! It’s a real variety show of prototypes. Trying to replicate some small feature you enjoy is a great way to learn your way around the engine.

Yeah, it helps you learn and it is also good to have those pieces of modules later on if you happen to need them for any project.

It’s been a while but here is something i’d been making on and off. An interior based on the movie The Comfort of Strangers(very strange movie.) 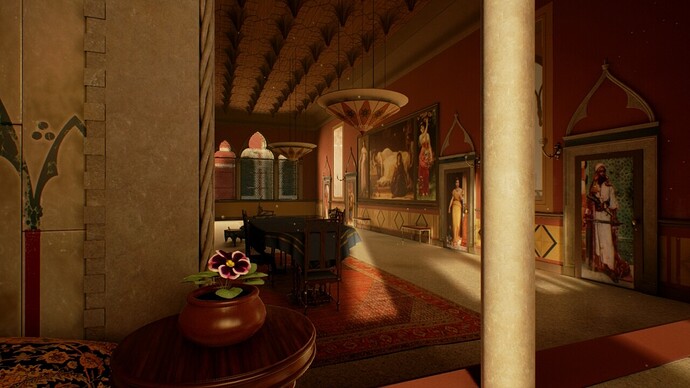 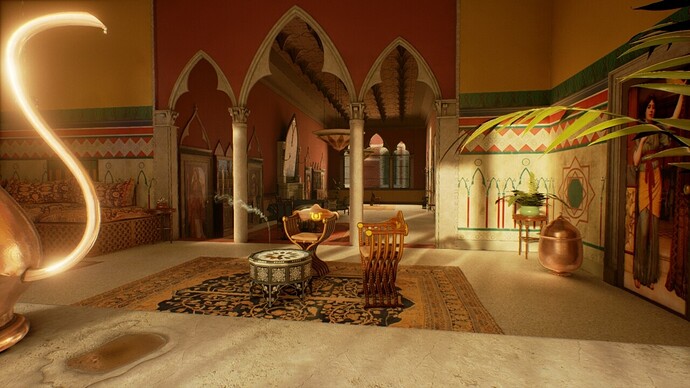 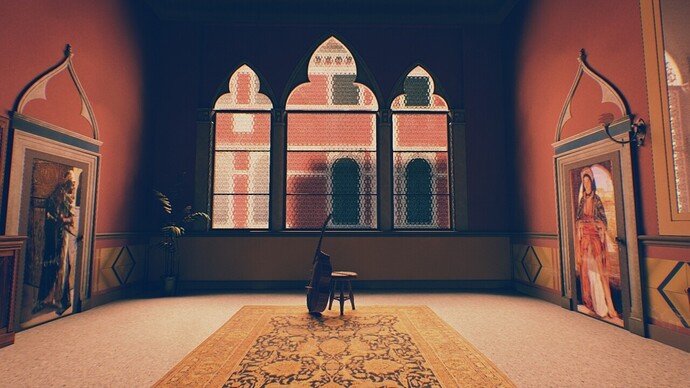 I was planning to make the other rooms and the kitchen as well but this is as much as a GTS 250 can handle apparently.

Still, it was a relaxing experience!

I went back to my physics driven spacecraft project lately. Added some gameplay with very basic AI and missions, sound fx and UI. The planet is from Jeremy’s gas planets awesomeness and the skybox is generated with Spacescape. 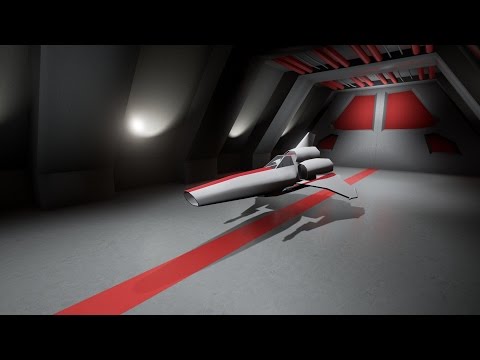 I’m planning to add localized damage and missiles next whenever it may be. I’ve also experimented with world origin shifting but it was weird. I had to execute it twice in order to actually reset the world origin. And i also noticed that it reduces the amount of jittering and stuff but once a component is offset due to extreme distance from 0,0,0(you can observe by travelling at full thrust for some time and see the gimbal indicator in the cockpit go nuts) it doesnt reset its location with world origin shifting, so i skipped that for this demo. I’m also giving the packaged project if anyone wants to give it a try. Let me know if you have any suggestions or features you want to see added!

Note: If anyone happens to play it, automatic thruster braking system is disabled in Precision level on purpose.

) and homing missile is on it’s way. I should be able to update the download link next week.