I have a vertically scrolling endless runner project I’m working on. I have a blueprint with several rows of platforms on, whose visibility and collision are dynamically generated; there’re two instances of this blueprint and one jumps below the other to keep the game running forever.

Ultimately I’m wanting to spawn some enemies that patrol the platforms, and some that chase you down.

Working on the one that chases you first, and my main problem seems to be that I can’t get the navmesh to move down and generate on the newly moved platform set. So naturally my current enemy chases you as far down as the first two sets and then stops. I’ve tried this: 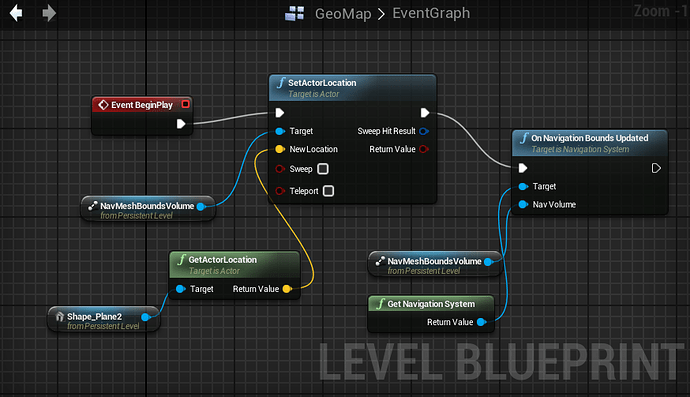 63326-it+work.png874×504 108 KB
(from a previous, similar question) and a number of other things (hooking the nashmesh up to the script that drives the moving camera and top and bottom kill boxes - I’ve also tried making the navmesh bounds box really long.) When my Runtime Generation is set to Dynamic it still doesn’t appear to work, and also seems to stop the AI running off the end of the platform it’s spawned on and onto the one below (to chase).

Anybody else managed to make a navmesh appear on a mesh that appears dynamically during the game? Any work-arounds or advice would be hugely appreciated!