Hey there,
I have some enemies created like in this livetraining: Pawn Movement Techniques | Live Training | Unreal Engine - YouTube

Now there´s a little problem, some enemies are longer than the sphere which is colliding with the spheres of other enemies (like on snake)…
If I would scale the sphere up to overlap the complete enemies mesh, no enemy can pass by the side in some meters.
If I let the scale be the same, other enemies are overlapping the mesh.

My option was to set the skeletal to block the sphere, but then the enemy would fly around or just freak out…

Is there any other way available to let the sphere ignore the skeletals collision of the same instance but not on others? 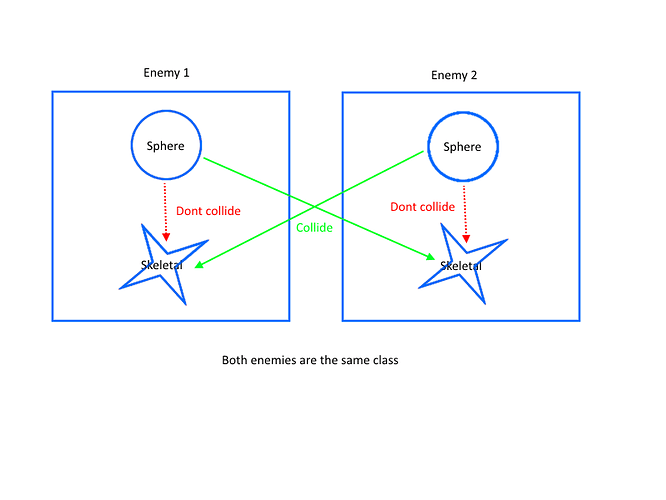 Anyone have an idea how to do this?

An approach, although a hacky one, would be to make multiple collision channels like “Team1” & “Team2” and set their collision responses accordingly when they spawn.
But not a viable option if you have multiple enemies in a free for all, since you can’t have infenitely many collision channels.
If you don’t have the need for it to get blocked for physics/constraining reasons you could use OnOverlap to check if they’re allowed to do things.
Hope you can find a solution.

Thanks, but I have too many enemies…
I was hoping there´s any way I was not trying before, but ■■■■ happens^^