How to replicate from client to server in blueprints

Hello everyone. I cannot replicate from client to server with blueprints.

I want to know how can I change a variable from client that will change on both server and client.

So the client changes the testStr by pressing “H”, and shows the value “changed” when he press “J”.
But when the server press “J”, it shows the default value “default”.

I have also tried changing the variable with a function with “run on server”, “multicast”, “run on owning client” in myGameState but they all fail and the server just shows the default value “default”.

Pls tell me how to change a variable by client that will change on both client and server. Thanks.

Just some quick points, the variable will need to be changed on the server for it to be replicated to the clients. If you would like the client to change the variable, then the easiest way would be to call a custom event which is run on the server.

Do you have this variable in both myGameInstance AND the Game State? The game state exists on both server and clients (replicated), the game instance however I believe is not replicated amongst server/clients.

If you have teststr set to replicated AND you are calling the change through a custom event in your game state which is run on the server, then it should work. 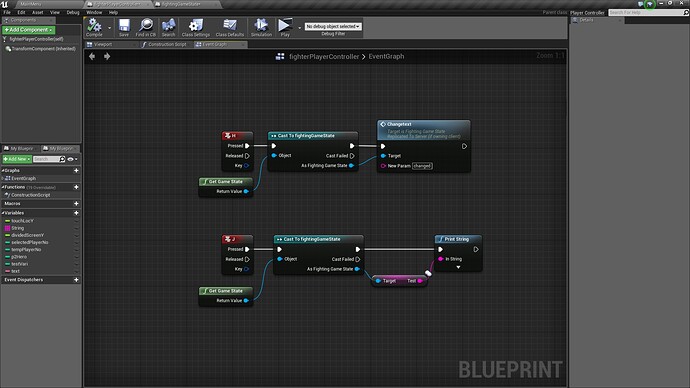 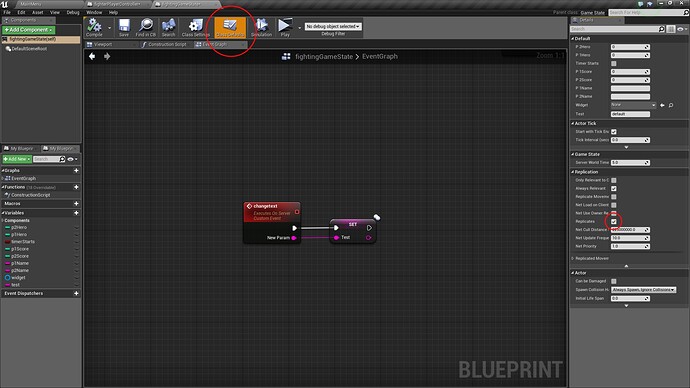 Ok, so I threw together your setup and tried to see if I could pin point where the issue was occurring. I was able to get it working with the following setup which looks to be the same:

My thought overall is that your setup looks correct so there might be an external influence which will be changing the result you are seeing. What I think it could be which may seem obvious, but make sure the correct game state is referenced in your game mode. Sometimes setting this in the project settings works, but others you might find that in the levels World settings that it might be referencing a different game mode, which also means a different game state.