How to figure out if something can be seen by the player in BP?

I need to know if the player is able to see a certain actor/component or not in my game, but I can’t figure out how to do this in Blueprint, and if it is even possible at all?

I can do traces from the player camera, but that traces from the actor, not from what the camera actually sees. I can do forward vector trace but I don’t have much luck with that either. I want to know if the camera currently displays this actor. That would open up a wide number of gameplay possibilities.

So I basically want to retrieve “IsCurrentlyFrustrumCulledByCamera” true false, or something along those lines.

It seems we should certainly expose Get Last REnder Time to BLueprint-land, I added a request for that, small change!

I made a Blueprint Node Library for you as a plugin,

BP library nodes can be used in any graph including Animation Node Graphs!

one retrieves an array of all recently rendered actors

the other retrieves an array of all actors not rendered recently

I’ve tested it as working!

You can decide what qualifies as “recently”

I default to 0.01 seconds, which is just a few ticks

#Get Name as String

anyone can download this blueprint library as a plugin here
http://forums.epicgames.com/threads/977316-Rama-s-Blueprint-Function-Library-As-a-Plugin-For-You 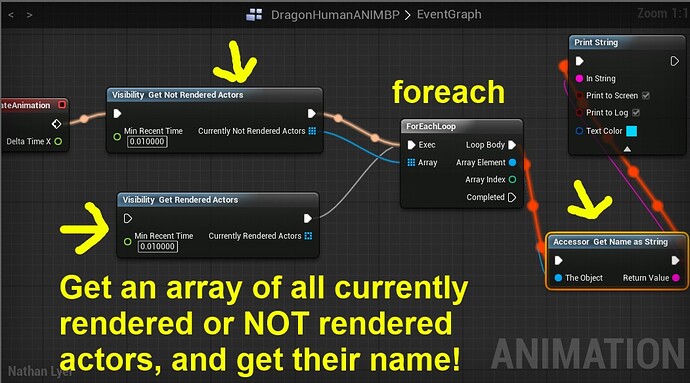 Let me know how it goes for you!

Do you have a code-based project where you could compile BP library functions?

#see higher up for non-compile solution

Is it possible to download your ‘blueprint library as plugin’?
When I follow your link, it says that I don’t have permission to do that

This is a question from the beta version of the engine. We are marking this answered for tracking purposes. If you are experiencing an issue similar to this please post a new question.