How Sketchfab can help Game Devs

We just wrote an article named “How Sketchfab can help game devs” on our blog, and that’s why we thought you might be interested.

As you probably know, PBR is fast becoming the standard way to render 3d content and it’s great to finally share this support with the Unreal community.

You can read more about it on our blog here: http://blog.sketchfab.com/post/112612737009/physically-based-rendering-is-here

We’re excited to announce that we’ve made another leap forward that will help you prototype your work and discover the work of others. Thanks to our WebVR integration it’s now possible to explore every one of the close-to-a-million scenes uploaded by you – our community – in VR on mobile (Cardboard, GearVR) AND on desktop with the HTC Vive and Oculus Rift.

To make exploring in VR easier we’ve added our VR Launcher allowing you to browse scenes without leaving the googles, VR teleportation to move around scenes with ease and a VR Scene Editor to simply and quickly set up your models for the best possible viewing experience in VR.

Check out our site to see how you can now export from your favorite 3D software as part of your work-flow and instantly view your work or work-in-progress in VR!

Twitter now supports 3D and VR thanks to Sketchfab

We’re pleased to announce today that we are now officially supported on Twitter. Sketchfab 3D and VR files now natively work in the Twitter Timeline just by sharing a link. That’s another great way to share your work with the world! 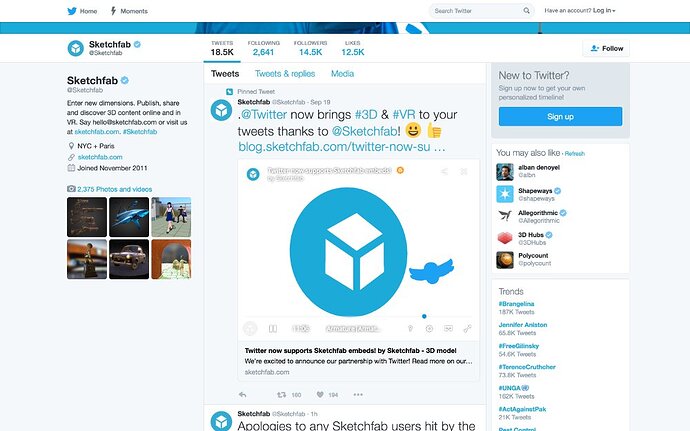