How do you make a Door open Gradually on leaver pull?

Hay guys, im trying to create a complex door which opens via pressing multiple leavers of sort, this will then open the door gradually each time (i.e you would pull one leave and it would open a door 1/5 of the way whereas when you press the others it would do the same making it go from 1/5… 2/5…3/5…4/5… and then fully open). Has anybody got any tips on how I would create a blueprint for this?

a couple ways to do this. if you want to use a timeline, you could create an alpha track the drives a lerp from 0 to 90 in a ‘set rotation’ node for the DoorBP. then add an event track in that same timeline. each event you add can then trigger a custom event outside of the timeline that stops the timeline. so when you pull the lever, it can trigger to play the timeline again. this method is a linear progression approach if that fits into your game design.

if you’re looking for a non-linear (or parallel) design, you may want to write a function that RinterpTo’s the door’s rotation from current rotation to desired rotation. and each lever is linked to a specific rotation, one of which is the full 90.

This can of course also be done with vinterp to move the door to the side.

And an animation is also a possibility though a lot more restrictive.

Cheers for the help you two :), iv been playing around trying to get this to work for a while now, whilst i understand briefly what you guys are saying im finding it really hard to put into practice as blueprints is something I struggle with. I’ve manager to make it so a lerp makes the door open 0.5 of the way but it wont reset and redo it when i press ‘E’ over and over. Iv played around with the float aspect of it also but got this to work with just a vector track. Iv included an image of what worked for me to some degree and cut out all the jibble jabble which made the door fly away and all sorts. How would I make it so It would go in a sequence and reset the timeline and vector values (of sort) for each other button I press (not including the same one) :S 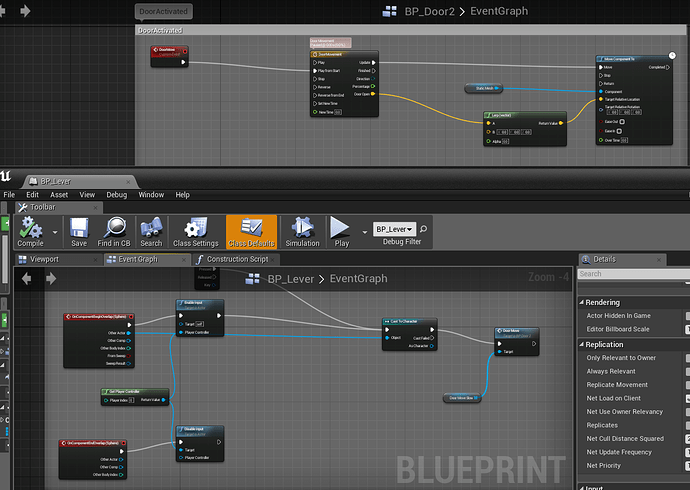 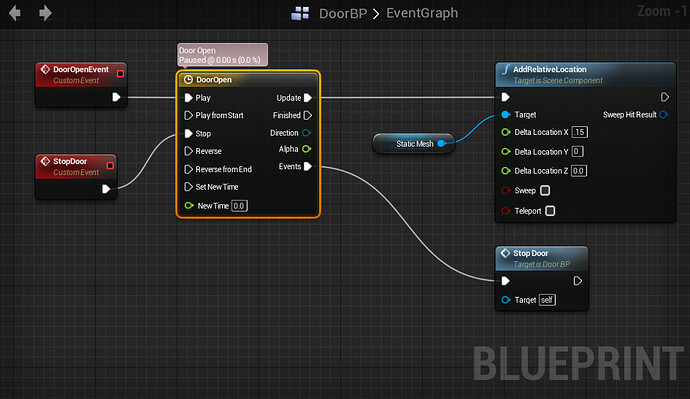 this setup works, but in the long run you’ll probably want to set up explicit points for the door to move to rather than a timed increment. In this case, i’m not using the alpha, but instead just driving an offset as an example. hope this helps.