How can I move the engine and the launcher to a separate drive?

I installed the launcher and the engines on my C drive, but I want to put it on another drive.

How can I do this without installing it again?

I am sure there is a way to do this but I think I ended up copying the engine files to the new location, uninstalled epic games launcher then re-installed it to the new drive/location.

This is how to move the Launcher.
You can use a symbolic link to the new location. A symbolic link is totally transparent to the filesystem and any program. (Don’t confuse it with a simple link or otherwise called a "shortcut) There is an old blog post -view it here- about moving the vault out of the launcher to gain space in Windows system disk / partition (C: usually) Since then the vault can be moved from the launcher configuration settings, the gear wheel at the top right.

But I figured why create yet another Epic Games location, why not move the whole Launcher and gain that much extra space, for which job the symbolic link remains an elegant solution.

For this example the installation was typical UE4.16.2, meaning “Epic Games” (containing the Launcher) folder directly under C:\ and the Engine executables, binaries and program files, under “C:\Program Files” So modifying the instruction set from the old blog instructions :

That’s it!
The new location is transparent to the file system (it “thinks” it’s still in C drive), so do not change any shortcuts to the Launcher executional, either pinned on your Taskbar, Start menu, your desktop or wherever else! These should still point to C:\ location, see the properties of my desktop shortcut, as an example : 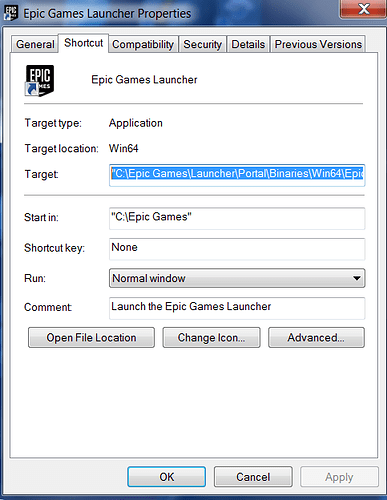 Now delete the old VaultCache folder and free up your drive

The engine is normally in the Program Files folder of Windows. Not sure how the symbolic link will work there.

If anybody else is struggling to move the installed engines themselves to another drive: Here’s what I did.

I have 3 different versions of the engine installed, they eat up roughly 141 Gigabytes on my too-small C: hard drive.

Sure I can just move them somewhere else, but the the launcher won’t find them anymore.

There is this (Multiple Launcher Installs | Unreal Engine Documentation) documentation, but it simply did not work for me, the launcher would insist that the engines were not installed anymore.

However, what DID the trick for me was to look into the files located in C:\ProgramData\Epic\EpicGamesLauncher\Data\Manifests, they are named e.g. “AB44BCC047XX8A0E5AABBCCDDDE4D5D1.item”

Their content is plain text, and what I did was to change all references of “old-install-path” to “new-install-path”.

What I needed to do was to replace all occurences of “C:\Epic Games” in these files with (in my case) “G:\epic”. (I had 3 occurences per manifest file)

You should close the launcher before doing so!

Hope that helps someone, it sure would have saved me two hours of fiddling around …

Thanks for this it helped ! But at first try It didn’t work for me. After reading the other manifests, i noticed the original location “C:\Epic\UE_4.26” had two “” between each folder. I then added the additionnal “” to each of the 3 addresses for every manifests and it worked again!