No need to name the main gun component “Mesh1P” anymore. Now it can be named whatever you want, just like the other components, but it needs to have a tag named “MainMesh”. This facilitates switching the main mesh component from skeletal mesh to static mesh and vice versa, since you don’t need to replace the reference in the code anymore.

No need to name the main gun component “Mesh1P” anymore. Now it can be named whatever you want, just like the other components, but it needs to have a tag named “MainMesh”. This facilitates switching the main mesh component from skeletal mesh to static mesh and vice versa, since you don’t need to replace the reference in the code anymore.

Hey man. I just got this and I would like to know the best way to not use a flip flop action so I can aim by holding instead. I also changed the zoom to be like that by using the reverse function and it works great but for the other, I want to make sure I don’t break anything.

Hey, just do this change in the anim blueprint (AB_ExampleCharacter). Delete the FlipFlop and add another custom event (ExitAim), wired like shown below:

Then do this change in the character blueprint (B_ExampleCharacter): 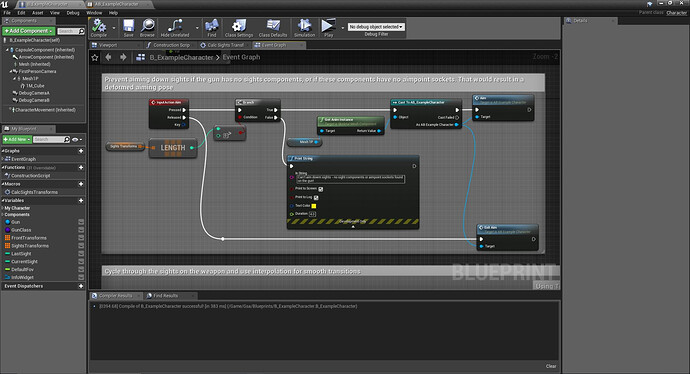 Please let me know if you encounter any problems…

Hello. Is there any way to get your sight aligner to work in a replicated game. The sights work on the server but not on the client.

Could you tell me more precisely what your’re having trouble with? I just did a test in multiplayer mode and the sights worked on server and on all clients (please see the pics below).

Typically, in multiplayer, the anims themselves aren’t replicated, they are controlled locally on the client by their character, but the character on the client is controlled by the character on the server (replicated). It worked in the pics below because each client is controlling his own anims locally, but one client won’t see another client aiming down sights, unless you replicate the aim down sights command in the character. But you have to remember that the alignment happens on the FP floating arms, which aren’t supposed to be seen by other clients anyway. If you’re doing multiplayer with this character, you should add a whole body mesh to him to be seen by the other clients. This whole body mesh doesn’t need to align the sights, you just need to add a generic aiming pose to it so, from outside, he looks like he’s aiming his gun. Please tell me more preciselly where you’re having trouble right now and I’ll see how I can help you better. 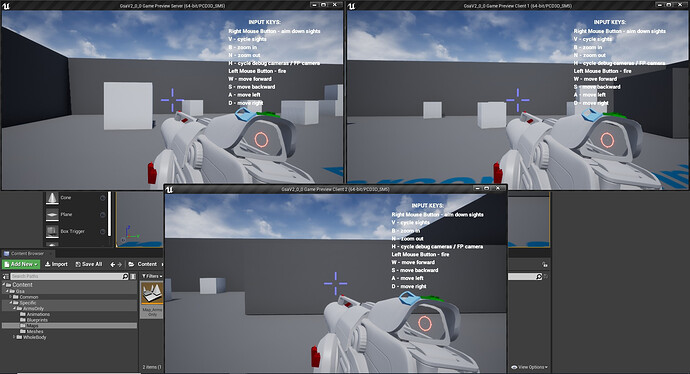 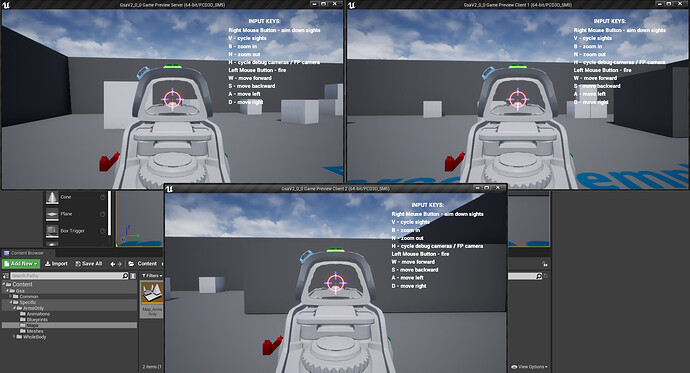 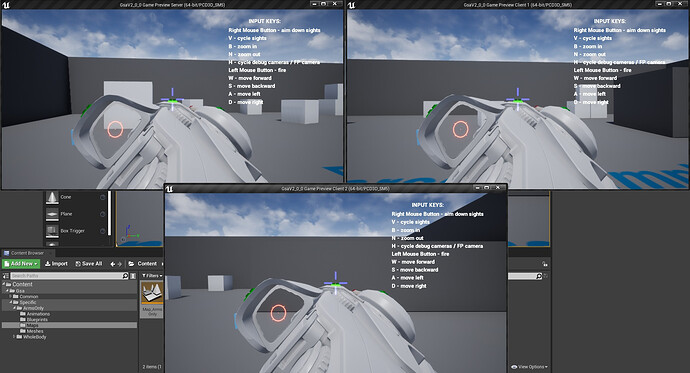 Thank you for your reply. It turned out that there was an error on my part, I was updating the sight transform when I equipped the weapon, so I just had to change the custom event to Multicast and now it works.

Hey, I’m glad to hear that it’s working. If you need anything, please ask!

hi, this kit thingy is really good but i need some help changing the skeleton. ive fumbled to getting it almost done but when i aim the gun flies off behind the camera (it still rotates around when changing sight). yes, i did the VB stuff, and i have no idea why. also the… not aiming stuff works

@Nonecares. Hey, first thing I have to ask is if you have added the sight sockets to tour gun, with X axis pointing forward, etc, as stated in the instructions video. Second, if you have copied the code on the gun - CalcSightsTransforms, etc. to your gun? Also did you do the same regarding character code? Third, is your skeleton hand bone named hand_r? Is the gun attached to it or a socket on it? Is you camera socket X axis pointing forward and Z up? Is it attached to the head bone and is your head bone named head?

@PeaceSells_
1&2: I haven’t changed the gun, so i guess no? i’ve just changed the arms skeleton in the download project (i want to get it working on my skeleton before integrating it). Sorry if ive misunderstood
3: The hand isn’t called that but I’ve changed everything that calls for different names im aware of (which if i remember correctly is the anim BP and CalcSightsTransforms)
4: The gun is attached to the hand using a socket and its the same name as the original in the mannequin.
5: I looked in both the mannequin skeletons and only the full body has a camera socket, im trying to change the arms only skeleton. i might be missing something or im just dumb sorry.
6: My head bone’s called “Head” (idk if the capital makes a difference so im just saying)

Thank you for the help

You’re right, I’ve been on the full-body version for so long that I automatically ask about the head and the head socket. They’re not necessary in the arms-only version. You’re also right about the hand bone, it’s only called in the gun blueprint and in the anim blueprint.

I’m setting a test project with a custom arms on my end and I’ll reply to you again with more details about it.

Sorry for being late, thank you for helping me (x2)

No problem at all.

It has this hierarchy:

So the TwoBoneIK node in the project only goes from hand to forearm, thus the hand can’t reach the camera properly. Maybe it will align if the TwoBoneIK is replaced by another node that allows the use of more bones, but it would probably still look bad from external view on the arms having all of these joints bending. But, then again, arms-only aren’t supposed to be viewed from external view anyway…

(the twist bones are parallel and not in the sequence, just like in Epic’s default skeleton)

This skeleton has extra bones for gun attachment, but, as you know, gun still must be attached to the hand or a socket on the hand.

Please let me know how the bone sequence in your custom arms is, because that might be the problem.

Immediate thought: I removed hands to make animation simpler, so it might count as “arm->forearm”
I’m using the forearm’s “end” bone for the IK, but that might not be “enough”.
(also, idk about when you tested it, but the IK works perfectly fine in the ABP for both arms, although that might have nothing to do with this and im just dumb)
Anyway, i’ll try looking for another node, but don’t know much about IK in unreal so dont really know what else to do atm.

Saw the response in the Marketplace:

This project started as an anim solution, that’s why it has no replication. Replication adds a layer of complexity that, for many costumers, gets in the way of integrating the asset’s actual main feature - auto aligning. I currently have no plans for including replication in this asset (this could change), but I do have another asset that has both auto-aligning and replication. However, the character in that asset isn’t full-body 1st person yet, it’s arms-only 1st person. I’m currently working on making him full-body 1st person.

Firstly, I appreciate the prompt response. I’m electing to wait for Full-body Alignment to be added to FPS Assemblable Gun as I need multiplayer weapon customization as well. That is a Very Slick Rail system. Ill subscribe to that thread for updates. Thanks again.