My primary boot SSD has become full, so today I was cleaning out the leftover junk that installers, updaters and other Windows stuff leaves behind. I noticed that there was about 5 gb of abandoned data from previous versions of UE4 that I did not have installed. These versions were installed and uninstalled using the launcher, not built from source. 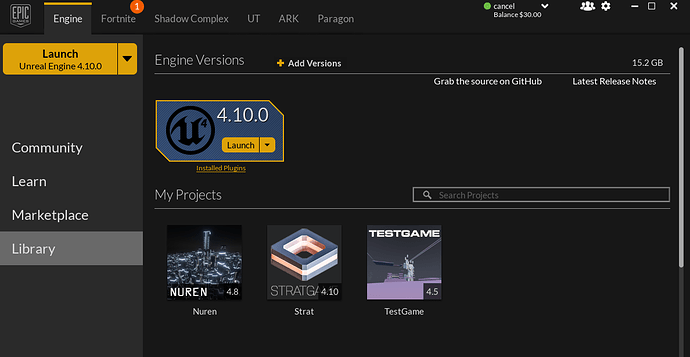 It’s not like this is super terrible, since the reality these days is that lots of software (Adobe and Autodesk, I’m looking at you) “loses” large amounts of binary data after uninstallation. That’s why I was looking over stuff manually to free up space. But it would be nice if it didn’t happen as often. This seems like a correctable problem with the launcher, I think – it should be safe for the launcher to remove those directories when that version of the engine is removed from the launcher, correct?

It’s also entirely possible that I’m using the launcher wrong, and that this is the intended behavior! But I wasn’t able to find any way from within the launcher to remove these build products.

The abandoned data is temporary files created by the editor during compilation. The launcher currently only deletes the files that it personally installs/creates, and unfortunately, the editor isn’t yet given a chance to clean up it’s own temporary files before uninstallation occurs.

I’ll create a ticket to get this addressed. Thanks for the feedback.