Hello devs, I want to share with you GoW 3 source code and assets via UE3/UDK Editor. Since Unreal Engine 4 release it for everyone I get this for free and personal use while it was available for limited time. Right now it can’t be officially downloaded but you may download it from my google drive.

Q - It is a full version of game?
A - Yes it is, including all assets but It missing manifest file in order to compile unreal script for each platforms.
Q - Which version of Engine it use?
A - It is version of game from september 14 2011.
Q - I can open my existing UDK game map or create new one?
A - The GoW Editor use .gear file formats to store map data.
Q - I can get full access to gears packages with different kind of assets and unreal script code as well for my games?
A - Yes of course.
Q - Okey but how to setup?
A - Once you unzip archive you should have 100GB free space on drives or even more, in the main path you should find readme.txt or something like that.
Q - I can run this on my specific PC?
A - On my 8 core amd cpu (ryzen 5 2600) and radeon rx570 it drop below 40fps.

In order to open through editor launch ‘Unreal Frontend’ in this directories, by default select pc target and launch editor it work for me.

For some reason im missing something or probably not doing it right so here is step by step of what I did.Please correct me when you have the time, for me to see where im making the mistake.

1:Unrar everything and I placed the folder named GoW3land XBOX_20120514I790FG in C>UDK (where I have my other separate udk builds installed)

2:You say to open the editor trough launch Unreal Front end, but the the extracted folder GoW3land XBOX_20120514I790FG in its Binaries directory only has 1 file and that is called build.properties.

3:Than I launched the Unreal Front End(here is a screenshot) , 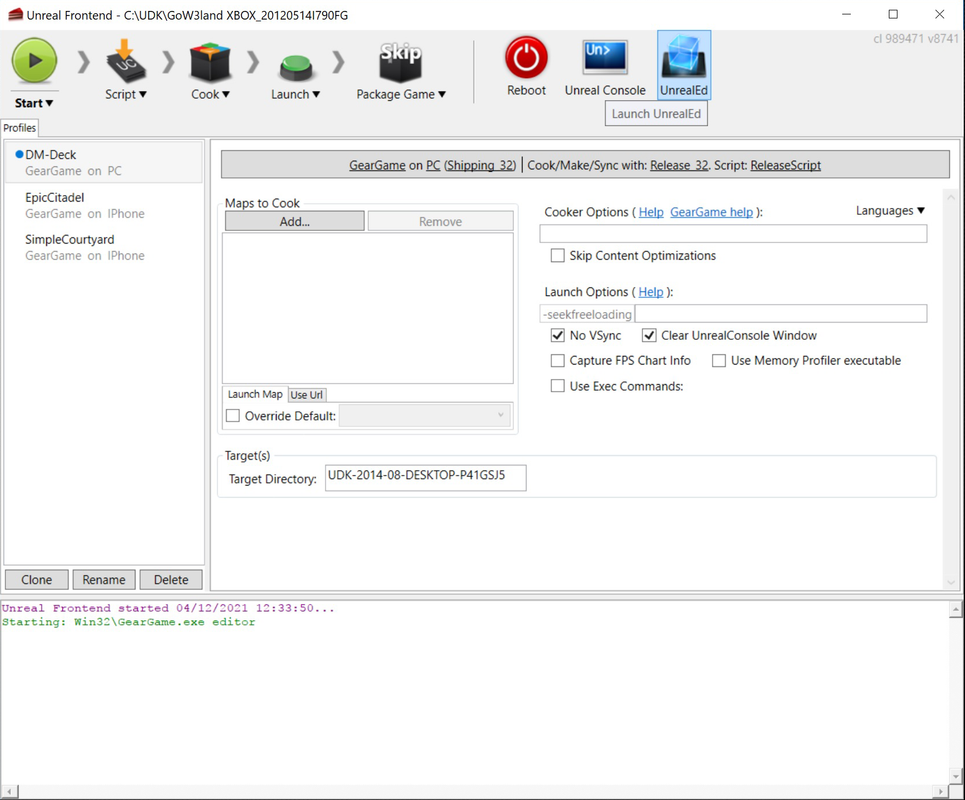 Now in WIN32 folder I do have a UDK exe and not a GearGame exe so I renamed the UDK exe to GearGame but its still the same.

I think i made this more complicated that it should be.

Could you please share step by step from unraring to opening the editor (when you have the time) how you opened the gears editor?

I finished downloading everything but there are problems.After extracting everything from the rars
it looks like the file UnrealEngine3_[2011-01-24_02.00].7z.001 is missing.
Also are these 7zip files?
Keehoon_Ahn, did you managed to download it and open the gears editor?