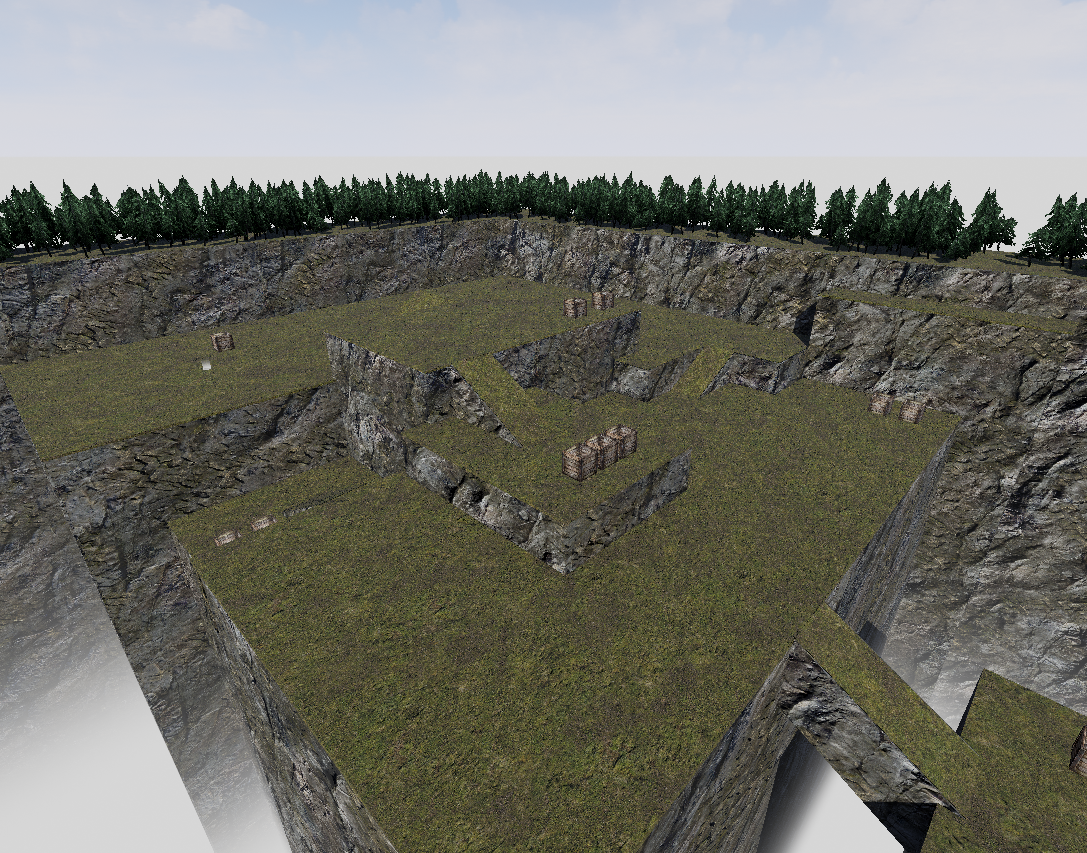 One Hit Wonder is a short FPS game, where you must climb up Tower Tower, fighting your way through your enemies (known as the Epikk). They are diverse robots, big, small, and human-sized that will stop at nothing to defeat you - but you’ve got your trusty gun. That shouldn’t be a problem! Oh, but, there is one small catch… You have limited ammo… And the Epikk are pretty powerful… And can kill you with a single touch… And won’t die until they’ve received 4 hits head-on… And with every floor comes more, harder enemies… And there’s someone awaiting you at the top…

Some known bugs/other issues
The last boss is fairly broken and is fairly OP/easy to kill depending on how you play it out. Nothing happens after finishing the boss battle and you are just left in the room. There is no pause menu.

Game Objective: Try to hit all the keys in time!

What Are The Controls ?

No known issues at the moment.

Assets:
All created by us including SoundFX(music). 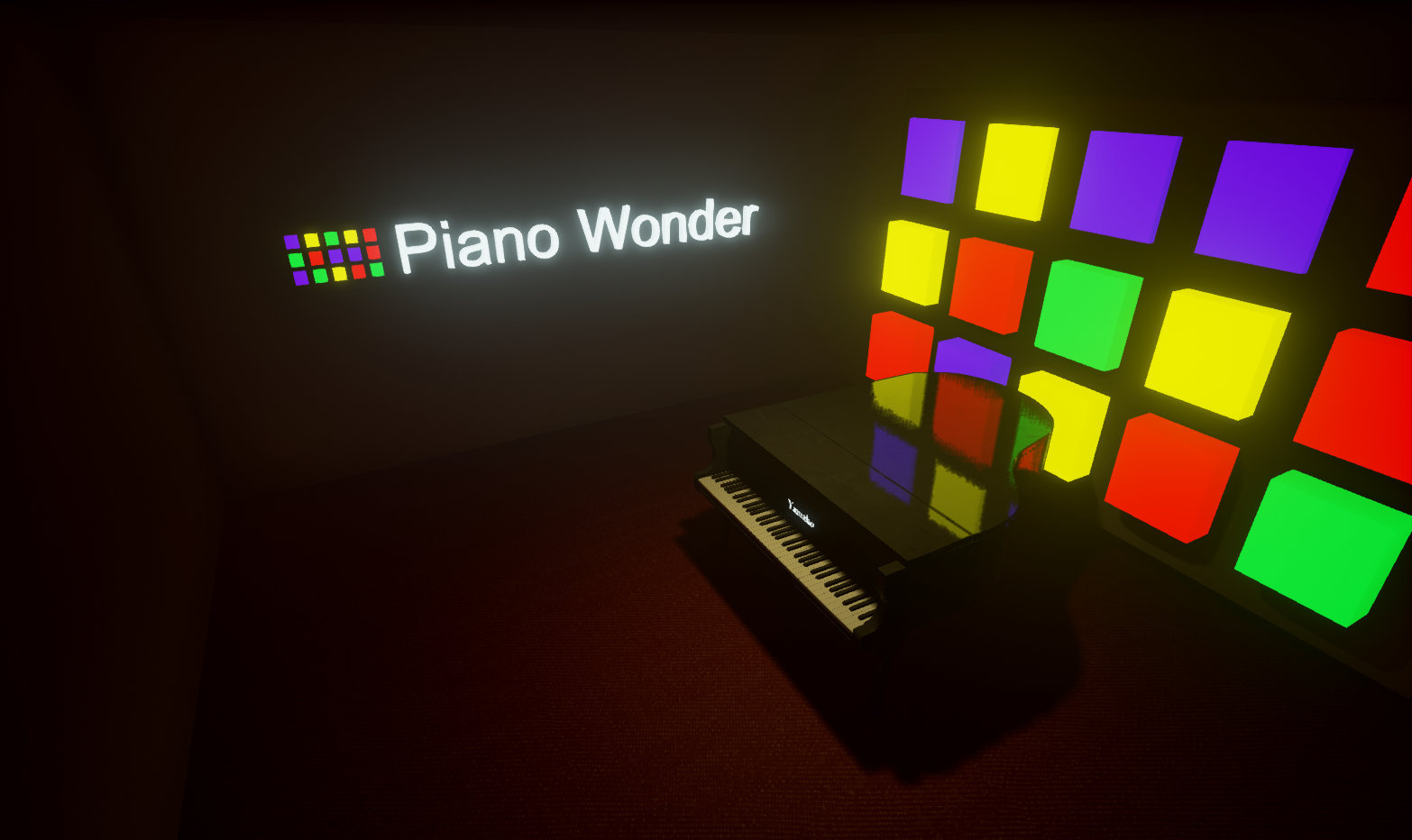 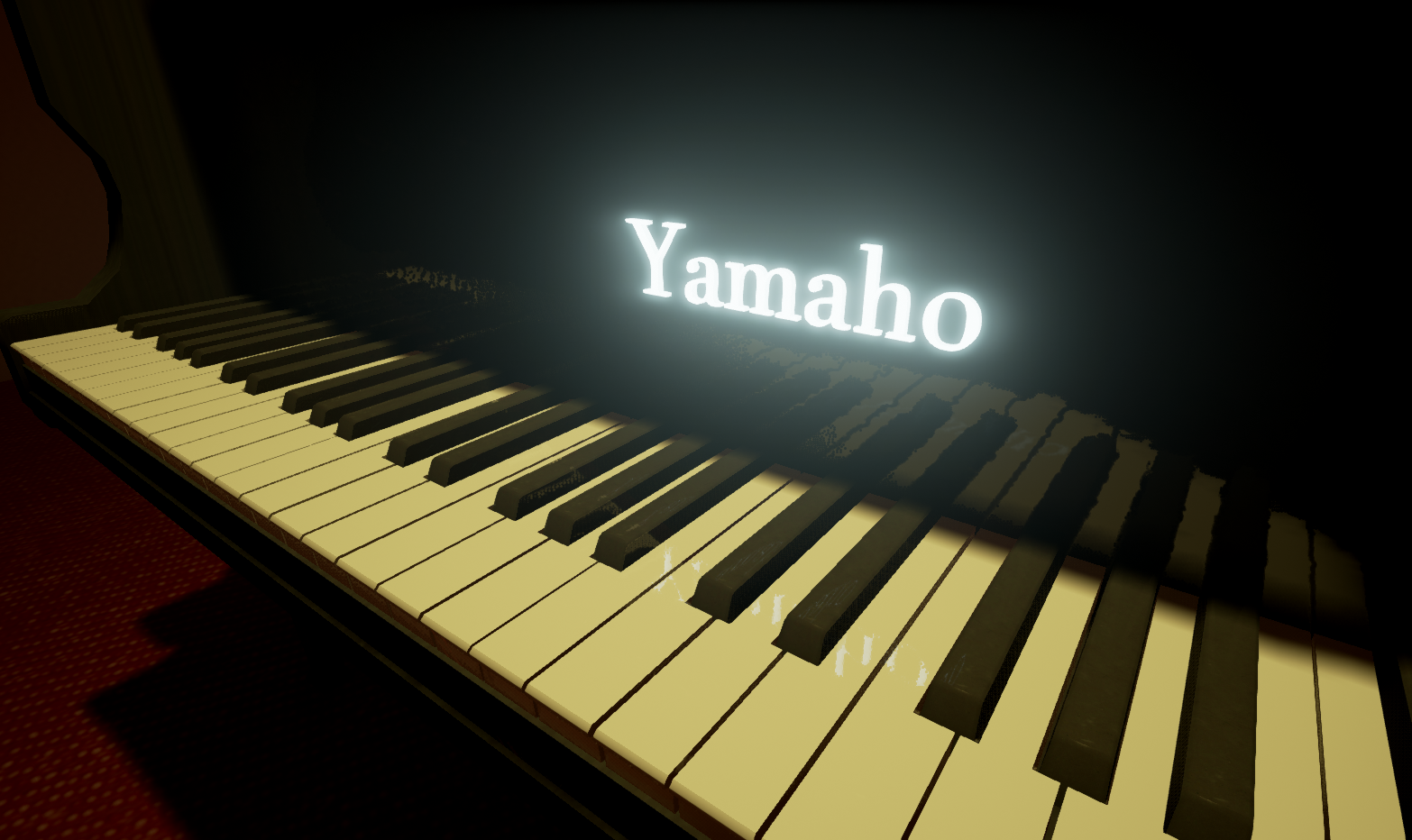 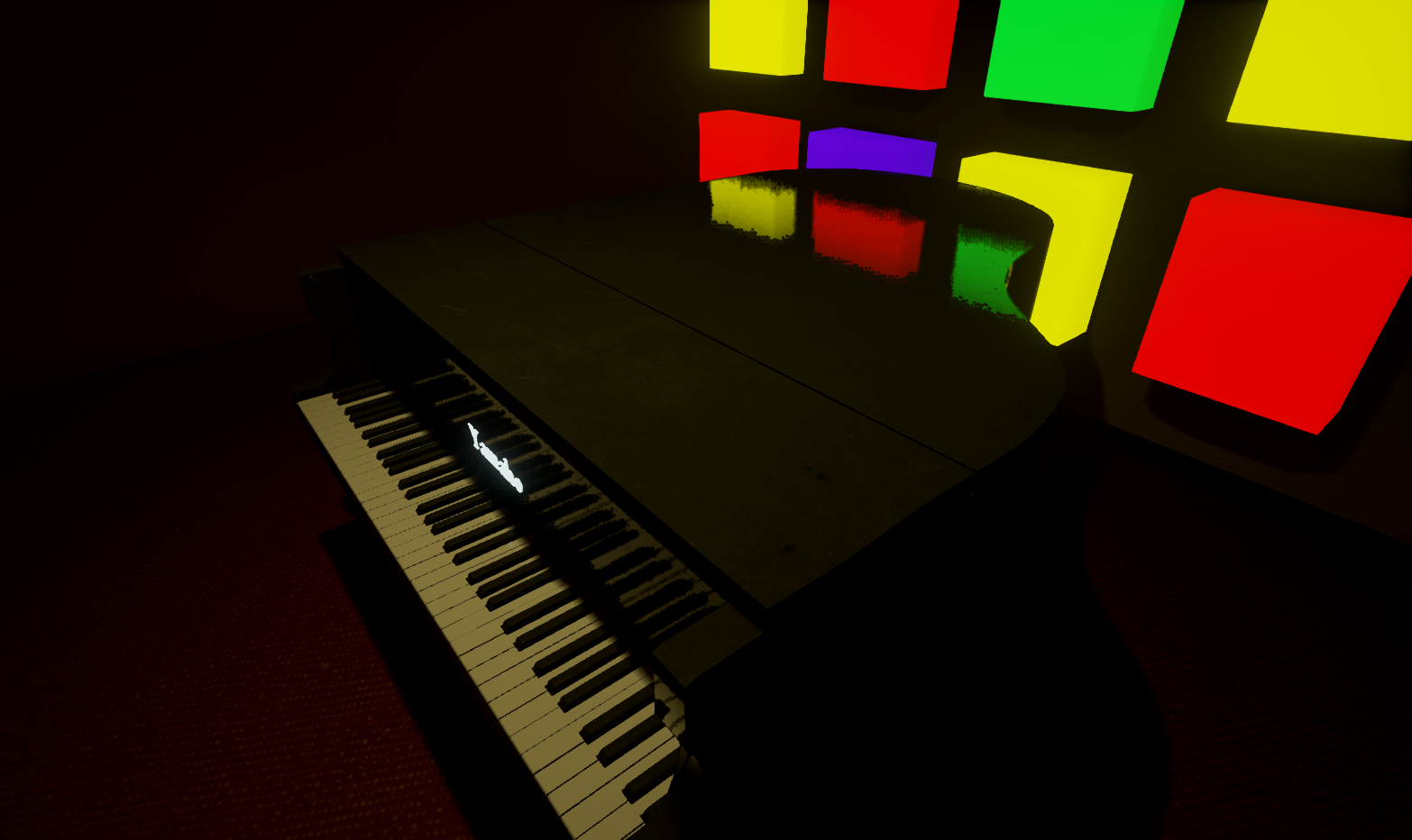 You can find the game HERE
Team name: JK5000
List of team members: JK5000
Name of your submission: JK5000_TheBulletBoy

Description:
You are a young boy that flyes gun bullets. You job is to help the world oldest circes gunmand. The game has four acts/levels.

Description: You are an assassin armed with a bow and only 1 arrow. your mission is to clear out the area of all the guards. If any guard is alerted they will run to the alarm and if any set it off you fail.

disclaimer The only way to package that game was convert it to engine version “4.11”. No known issues. 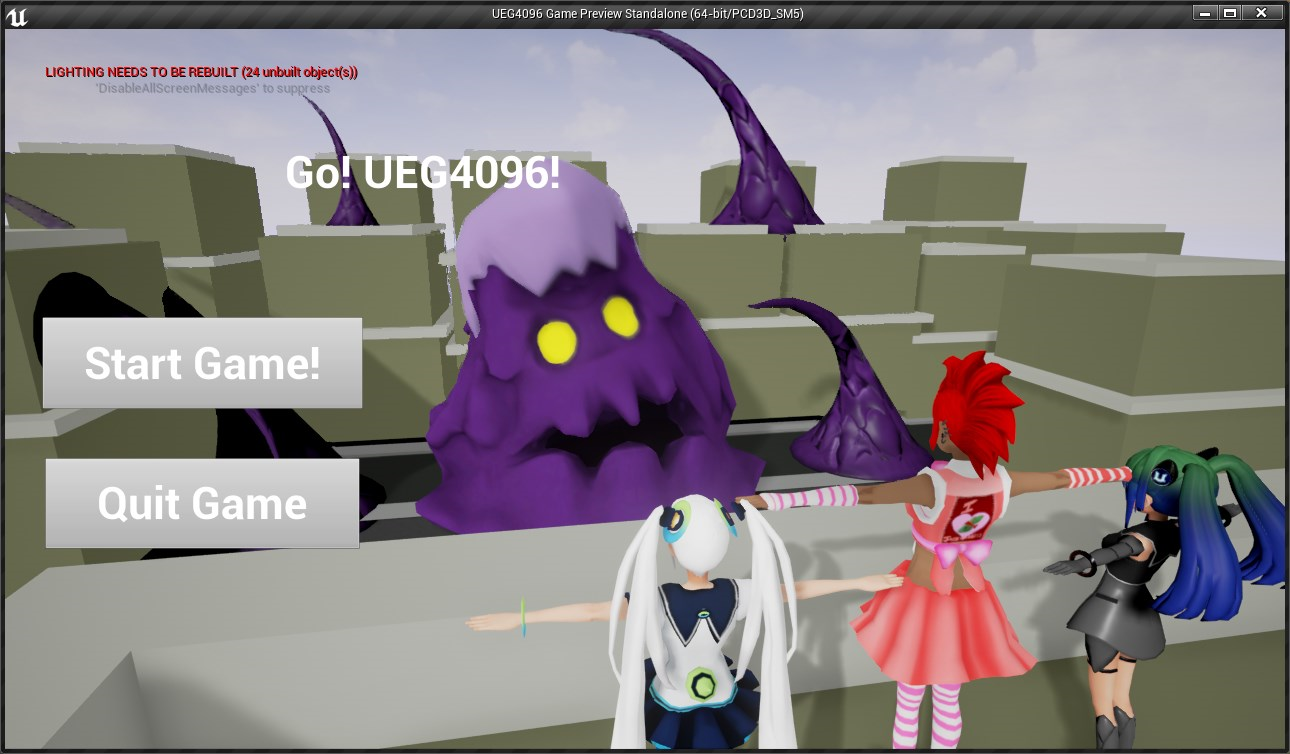 Local Multiplayer, race to the finish… only one gets to hit the button! Requires two xbox controllers to play.

**Objective: ** Use your shield to hit the ball at the target and score points.

Here is my entry, SupaFresh.

Note:
Do you have Rhythm? Dexterity? Style? Get your skills right. Because nobody wants to be a one hit wonder.

Graphics/Design/Dev/Music 100% original created by me for this Jam. I had fun doing it, hope you Enjoy!

Exclusively for the GearVR

NOTE 1: I did not include my oculussig file in the apk assets folder. You will need to include your own to install and run this on your GearVR device. I included a README.

NOTE 2: Only after I finished everything and packaged it up did I realize it should say “meteor” and not “asteroid.” D’oh!

Team Name: Joke Yeti
List of Team Members: John Yeager (Hyruth), Mike Foti (Horusalis)
Submission Name: Rock… Shoot We Forgot Paper and Scissors (RSWFPS)
Description: We had 3 maps planned out (one for each item) but unfortunately only the Ruins are fully functional. The other two can be selected but can only be moved around in. 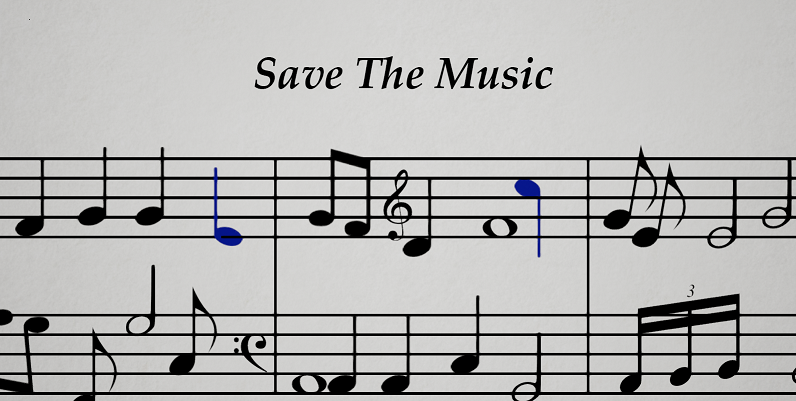 Game Name: Save The Music

-This is my first jam

i had fun working on this even though i started pretty late, i would’ve made more than one level if i had time.

-Everything else was made by me for this jam.

-Controls are kinda tricky but i have explained it all in the menu that pops up when the game starts “Sorry again, didn’t have enough time for a proper tutorial level or something like that”

Goal
Defend your treasure for as long as you can but do not hit the zombies or you will parish!

EDIT: Created a WIP thread for future versions of this: POINT CLICK ILL - Sneeze your way to victory [MULTIPLAYER][CROSSPLATFORM][CROSSPLAY][WIP]

Team Name:
Richard Boegli’s game studio for people who want to make games and want to do other stuff good too.
Abbreviated to richardboegli

Built in Linux. Cooked here for Win64
Looking forward to the masses of great games, and Allar playing them all!
There is a win state

music is free use from either twitchfm or NCS

So after watching Allar play my game it was brought to my attention that some of the blueprint functionality didn’t build into the project. After some testing, the project works fine in the editor but doesn’t cook correctly. I will continue to try and find out what is happening just so i can avoid this in the future.

The problem is when you focus on the “One Shot” glass, the game it is supposed to pop up a message asking the player if they want to drink the shot then if the player presses the letter o it launches a matinee sequence then open ups the “WinState” level allowing the player to cross the bridge and win. Unfortunately when the player puts their cross hairs on the shot glass it is not recognized in the build as it is when running it in the editor; nor does the game do anything when pressing o after viewing the shot glass. So, the trigger of viewing the shot glass isn’t being built into the executable as it works in the editor.

Okay, it was something simple, as it usually is. In case someone stumbles on this, or I forget what I did to fix it was change the text == function to test what the linetrace hit, I used Matches Wildcard function. The problem was in the editor I was simply looking for ShotGlass000 text match to trigger the event; when the compiler created a build it created an instance of the ShotGlass000 with an instance # (ShotGlass000_12 or the like) by using the wildcard function I looked for ShotGlass000*, and now the build works.

I also moved the created Event Tick from the character blueprint to the level blueprint before using the Matches Wildcard funtion, while this may have also been a cause of the problem, I can’t say for sure because I need to move on to other things.

Here are the links to the fixed game; these are NOT for the jam, these are only here to make me feel better.
LinuxNoEditor (because i haven’t seen an LNE yet)
DeflectionFix (Win 64)

Here is a video of it being played to completion through the editor.
https://youtube.com/watch?v=1luCeTbdiwk

Instructions on the menu screen. Have fun!

in about 43 hours, i made a minimalistic survival shmup. Try to survive all 3 levels without getting hit, and you could be the next, One Hit Wonder!

instructions:
use gamepad or WASD to move
Space to shoot
dodge the bullets, kill all the enemies, and finish 3 levels to win… if you get hit once you go back to level 1. 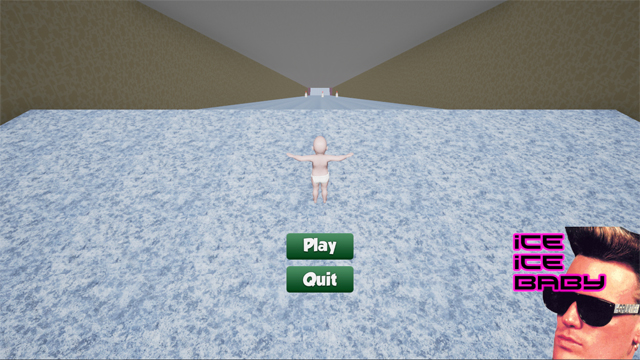 Description: Slide the baby down the icy slopes and into bed.

Notes: Most assets by others. Course (cubes!) and awesome 8-bit soundtrack by me. Thanks to all the friendly folks at http://opengameart.org/ http://tf3dm.com/ https://www.freesound.org/ and speedtree for providing free assets so I can jam on a limited time. And a special thanks to Vanilla for shaping my youth. Yo VIP, Let’s Kick it!