Hello everyone,
I am using Unreal Engine 4.16 with a plugin from Microsoft called Airsim. Currently I am experimenting with AI Blueprint Scripting. The tutorial I followed was: Unreal Engine 4 - AI Chase Player - YouTube
It works fine in the 3rd person shooter content from EpicGames.
If I try it to implement the AI behaviour in a bare project with Airsim activated and a custom vehicle I can’t get hold of the player character. As shown in the blueprint screenshot the player character has the value “none” which does not happen in the 3rd person shooter example.

The other screenshot shows the objects that are spawned during gameplay. All other objects in the scene that were placed by me are placed in the folders. You can see the PlayerController is present and the “Truck” should be the player’s character, that is I configured Airsim such that the Truck is used as the player’s character on “Play”. It does not work with the controlled pawn either. 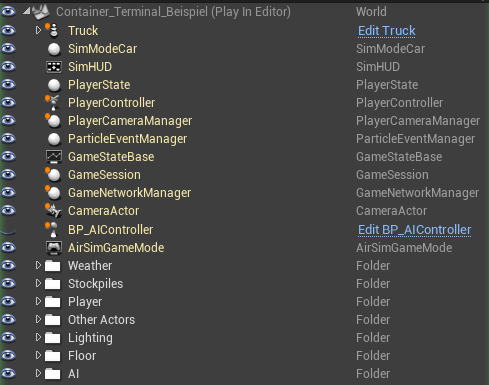 My Questions:
Is there another way to access the player character (location)?
How can I find out which objects actually controls the Truck?

bump No one? Also, want some insight.