I’ve set up a third person character, so it can move and strafe with WASD keys, and look around with mouse. I’ve also set up a basic attack animation, that the character can do while idle or running with a Per Bone Blend. What Just can’t figure out, is how to solve that the character plays a different attack animation while strafing left, and right. I’ve tried the following:
I’ve set up a montage for Basic Attack(for Idle and Run)
A montage for Strafe Left Attack
And a montage for Strafe Right Attack
I created different slots for these.
I created in the event graph a logic that choses which montage to play based on the Strafe Input Scale(which determines wether the character is strafing left or right).
I then created in the AnimGraph a setup with a Per Bone Layered Blend. When I connect only the Movement(idle/run/strafe), and Basic Attack(when there is no strafing) nodes to it, it goes fine, I can attack while standing idle, and running. BUT when I add other pins, and connect the Strafe Attack animations, it still only plays the Basic Attack Montage, whatever I do.

Here are the graphs: 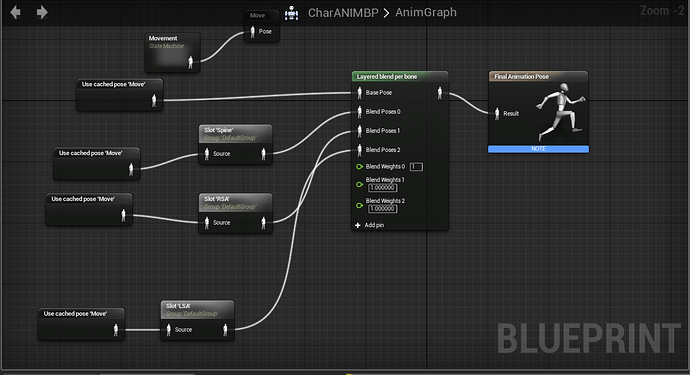 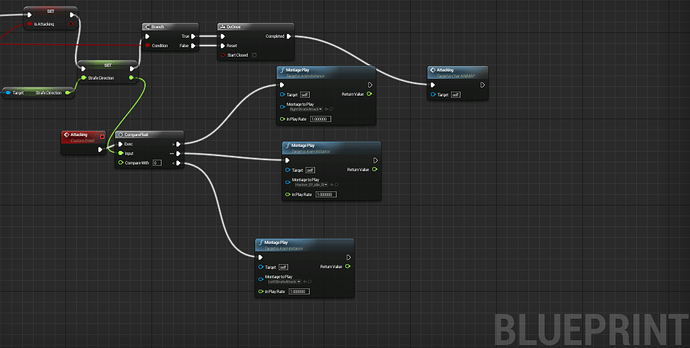 What approach would be best to solve this issue?

Ok, already solved it with Blend with Int