So I decided to give UE4 a whirl again for my 3D platformer game, and I’m kinda enjoying it actually. I’ve been able to reimplement the mechanics that I had so far into the engine with ease thanks to some video tutorials. However, I’ve ran to a bit of an…odd issue that I can’t seem to wrap my head around. And that’s actually getting the character to animate when I play the game. It’s a pretty strange case as I’ve said, so I’m gonna try to be as thuroe as possible when describing this.

So like I said, I’ve been using video tutorials to help me get on my feet with this project, and so far I think I’ve been following them to a T. So far, my animation blueprint looks like this. 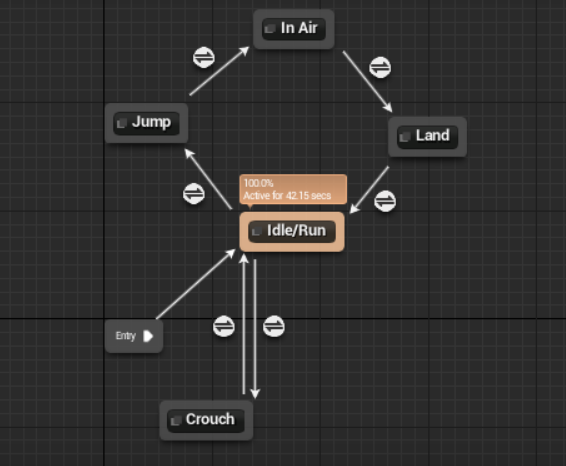 At first glance, it seems to work just fine. There aren’t any compiler errors, and even in the animation preview, all the animations transition like they should.

(Side Note: Yes I know one of the polygons on the model is messed up here. I don’t know why it’s like that, but it’s not interfering with my main goal of getting the basic mechanics made, so I won’t worry about that for now. :P)

Even in the preview window for the ThirdPersonController Blueprint, my squirrel character does the idle animation as if everything is working fine. But when I actually test him out, and play the game…