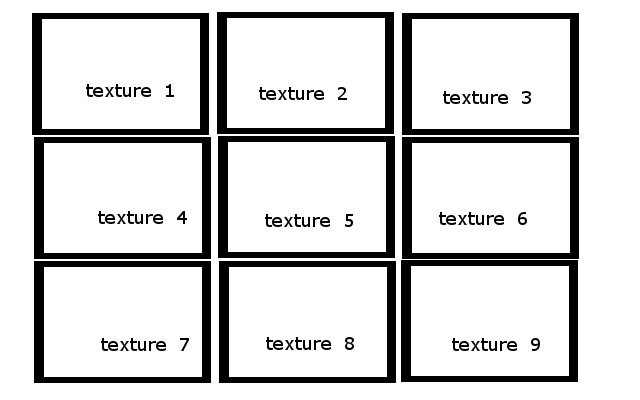 than the hole 8 textures would tile, I was also thinking about using this for a long path all textures would tile one after the other then when I paint it would reduce the affect of tiling, i can crate the textures but crating the material is harder, also the big question is am I wasting my time anyway.

This is probably not the best way of doing this. It would be inefficient. If you were to go down this route however it would be better to make one texture from the nine and scale it up. There are so many better methods to reduce texture repeat, a quick google search found this: What technique can I use to remove texture-repeating? - Asset Creation - Unreal Engine Forums

Yeah I have other methods like that one but I realy wasn’t that happy with it. I will play around with my texturrs some more
Thanks for the reply.

I’ve been experimenting with reducing tiling in my base terrain textures off and on for the last week, and so far the best results seem to come from a combination of texture mixing and rotation using a noise mask as a driver. My current favorite is a grass texture rotated onto itself at a different scale and then mixed with moss and dirt patches using the noise mask. That works well for heterogeneous terrains like fields, forests, etc. It doesn’t work as well for homogeneous terrains like sandy beaches, for example.

Yah I’ve look at that as well. But don’t you find that when you start to mask and rotate the same texture on top of its self it start to make the texture weird looking.
I was also going to look at having a “plan” texture as a bace then having 2 or 3 marsked texturrs that overlap the bace texteue. These would be clumps of grass, leaves, rocks and so on, then use a nose map with different sizes to give the effect of a larger texture and less tiling as the mask texturrs would have a diatance blend that you fad them out