Epic have tutorials on this matter somewhere.

Btw widgets should never have any logic on them and should be used as one-way end-point assets to just display information, never serving as output for any other blueprint.
If you need to read variables from any widget back to feed gameplay functions then your architecture is flawed. 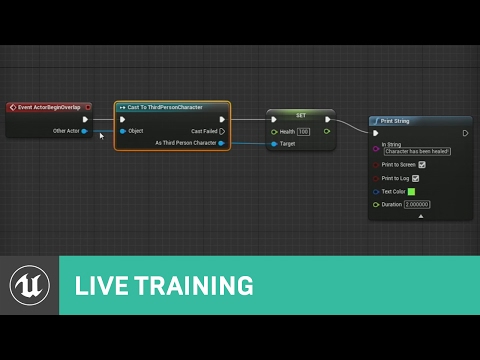 Im currently watching that…hopefully that will shed some light on it…
so am i thinking wrong if i want to push a button on a menu widget and have that change a variable that then tells the player controller hey i have to do this now?

Easy. Created this video quickly just for you. https://youtu.be/4859oy-sq1k

dude you are a rock star! thank you so much!!!
as you posted that I was playing with BP interfaces…is one method better than another?

Interfaces are good to avoid casting and inter-dependency between classes when you want to focus on build self-contained systems (such as inventory, skills, etc).
If you use Interface then you can avoid your widget having to wire a hard reference to your controller and casting to a specific class you expect that controller to be…

Consider the following:
Are the classes you have to communicate members of the same “game mechanic subsystem” by design? Then using Interfaces may be an unnecessary performance hit, use hard wired references instead.
But if you have to make two different systems communicate (for example: a set of door blueprints that can only be opened when player has a certain card key in inventory) then consider implementing Interfaces for the sake of limiting hard wired references while your project grow. If for any reason down the road you have to replace your player controller class, for example, then the Interface based approach will save you a lot of headache replacing Cast nodes.

James94Hodges and Bruno Xavier gave all you need pal, wish I had the luck to have such answers when I was learning this! Pionerism has its downs…