Check if Blueprint is being run within the editor (i.e if WITH_EDITOR in C++)

I’m looking for the Blueprint equivalent of #if WITH_EDITOR which is used in UE C++ to run perform certain actions only if the game is running within the context of the editor.

The main intention is to add useful debugging information in exceptional scenarios. Eg: Cast To MyActor fails and I want to print a simple message to the screen so I know that. I realize I can use the output log for this but I find it too verbose for this purpose. So does any such node exist to determine if game context is within the editor?

Not sure if the fact that blueprints being converted to a different form while cooking the game prevents such a check from being feasible.

Bump. I’m having the same problem, anyone have any solution?

I can’t believe that there’s no answer for this question!
The best way I know is GetPlatformName node, but I don’t think it’s a good way, since it only returns Windows for PIE.
So is there really no BP equivalent for WITH_EDITOR?!

//! Allow the blueprint to determine whether we are running with the editor or not

Add a custom option, such as “-editor” inside the server game options line, found in Edit->EditorPreferences->Play(LevelEditor)->MultiplayerOptions->ServerGameOptions.

Then make a macro or a global function in BP to GetGameOptions->DoesOptionExist("-editor").

Rama’s free Victory Plugin has a node to identify whether game logic is running in Editor,PIE,or Game World!
(39) Rama's Extra Blueprint Nodes for You as a Plugin, No C++ Required! - Blueprint Visual Scripting - Unreal Engine Forums!

Also the free Low Entry Standard Library plugin has a platform node (not exactly what you want, but it also has other useful stuff )

Since this is where google led me and it has NOT been updated, there is a ‘With Editor’ node now… You can just use that (its in the same place as the Is Shipping, Is Debug, Etc nodes)

Where are these With Editor and Is Shipping nodes that you speak of? I’ve tried adding using them in Blueprint in 4.24 but these nodes don’t exist. I’ve unticked Context Sensitive too, but they still don’t show up?

There is the node “Print String”, which spawn the message you want in the editor during play.
Not sure if it’s what you are looking for as I don’t know C++, but here you go 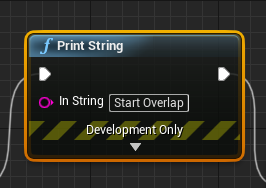 Where are these With Editor and Is Shipping nodes that you speak of? I’ve tried adding using them in Blueprint in 4.24 but these nodes don’t exist. I’ve unticked Context Sensitive too, but they still don’t show up?

Same issue here. Were these removed?

Or did the name change? This thread is literally the only result if I search for it.

Same issue here. Were these removed?

Maybe the poster was using a 3rd-Party Plugin for this and just forgot about it?
Anyway…
You can always this try below… Disclaimer: Didn’t do a whole lot of testing on it.

Is there a way to check in Blueprints if your in Standalone Game or not? Blueprint

Really miss an Is PIE test too (one was included in UDK-Kismet as well). Possible workarounds: Use a ‘Get Command Line’ Node (pass different parameters when not PIE i.e. standalone) Explore using PlayerStartPIE to see if it is different in PIE versus standalone, See [here][1] Try this hack, which I’ve not done any real testing on, but it seems to work so far in 4.18 etc. Add a mesh of any type and zero scale (so its invisible) in the level. Give it a tag like IsPIE_MeshTest. Then in the main…

Thanks, this is exactly what I was looking for!

This is NOT correct answer, as this have next code inside:

Correct answer is to create Blueprint Library using C++ and use solution from @EniGmaa .

The node “Is Packaged For Distribution” works for me as well!

If that is your plugin, you should make it 100% clear on the marketplace page if the plugin requires the project to support C++ or not. Right now, to me it seems as if it does, which disqualifies it for us.

The solution I posted works for those who do not wish to have C++ at all.