Changing Client Max Walk Speed does not work in Multiplayer

Hi, im pretty new to UE4 but spent many hours on my first Multiplayer Game. But now, i got stuck on a point. I was looking for several tutorials but could not solve my problem since now. Maybe one can help me on this issue. Thanks very much in advance 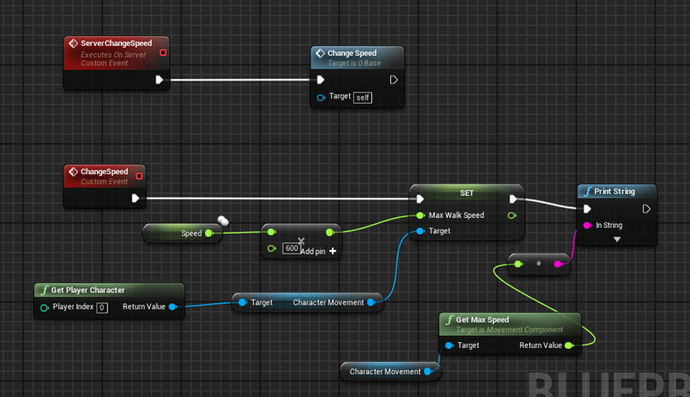 my Problem is, that the servers speed works perfect, but not the client. Thanks very much for helping in advance, any hint is very much appreciated
Regards
K.

You have to change the Speed on both Server and Client.
Create a RunOnServer Event and a RunOnClient Event which changes your speed.
The MaxWalkSpeed Variable is not replicated within the CharacterMovementComponent.

Hi, thanks very much for your fast reply. i somehow don’t get it. i got rid of the GetPlayerCharacter() node and set the “ChangeSpeed” to run on owning client and copied everything under “ChangeSpeed” and pasted it to “ServerChangeSpeed” which is set to “Run on Server”. But still, it does not work. Did i understand your hints correctly? or did i misunderstand it?
thanks for helping in advance
K

I did it similar to this:

In the DashPressed Event, I first change the local walking Speed and then I change it on the Server Version of my pawn.

Thanks very much for your fast reply. I rebuilt the whole speed movement and now it works

thanks a lot
K