Can't get the simplest animation to work

I have some experience with animation, but not for videogames. So, for the sake of testing my skills I just made a simple cube with another cube rotating on it with bones on 3ds max:

I used the following settings to export, and I also tried many combinations of different settings:

These were the settings I used to import on UE4. Here I tried other combinations of settings to try to get it to work: 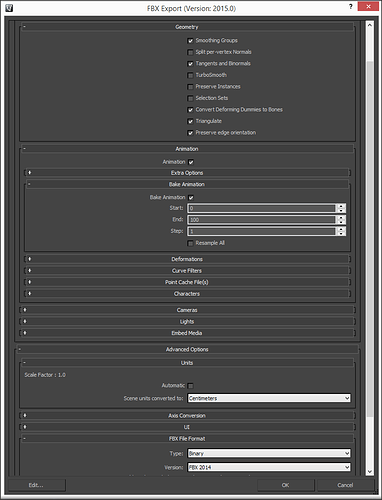 Here is a screenshot of the animation sequence: 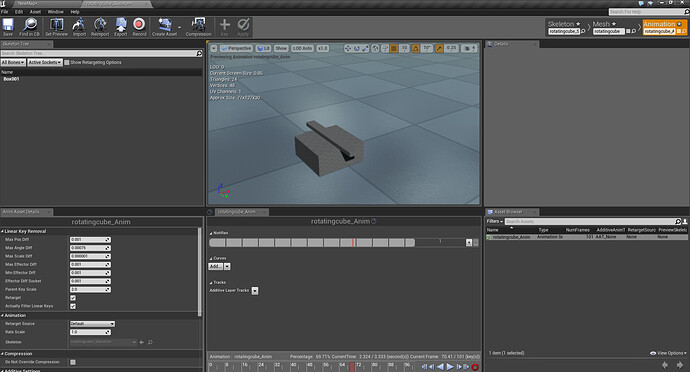 So, yeah, the animation doesn’t work. I have been trying to get this to work for 2 days now, and on different computers on different UE4 versions (I’m now using 4.7.3). I have run out of ideas. The skinning looks perfectly fine, and on 3ds max the animation works. I tried so many combinations of export/import settings with no success. I also tried looking at the documentation but most of it just covers animation for human characters, and the FBX import pipeline doesn’t explain what every checkbox does. The videos don’t cover animation outside of UE4.

So what am I missing here? Is it even possible to import a simple animation made with 2 bones from 3ds max?
Thank you

hmmm , that’s weird, I just tried an old test model of mine that had a full 360 degree animation and it worked fine, unfortunately I use blender so I cant really help you work out the problem as it could be something your doing in max but you should be able to import an anim with 360 rotation instead of 90 and it should still work.