Can anyone break down and describe the "NavMesh" from content example?

Could anyone break down and describe setting up of NavMesh in UE4 or link me to any other documentation/tutorial that explains it in detail?

Unfortunately the documentation is referring to a slightly older version of that level, and we are working to update that. But the principles are the same.

A Navmesh is set up as a volume. In the Modes tab, select Volumes and then scroll down to Nav Mesh Bounds Volume. Placing one in your level so that your map is within the volume’s bounds will create a NavMesh Actor that you can see in your level if you press P or go to Show and check Navigation to on. The Nav Mesh will be built automatically.

Did you have any specific questions about setting up your Nav Mesh?

Thank you for the answer. I realized I have a even primitive task at hand.

Since am new to UE4, am using “Blueprint only” to do this, and just to be faster I am using the existing “NavMesh” umap from content example . I have attached the screenshot of my blueprint. Here is what is happening,

If anyone sees an obvious mistake kindly help me out. 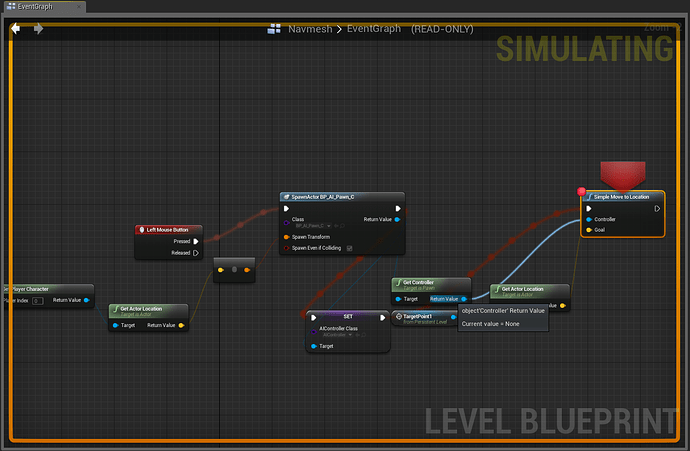 Found the answer to my problem, Apparently I had to spawn default controller along with AI. The below Blueprint works and does what I want to.