I am able to get my camera shake to affect the camera, but I’m not able to get it to affect my weapon’s bullet trajectory. I have tried both WorldCameraShake and ClientPlayCameraShake. The camera shakes, but my bullets still fire as though the gun was being held perfectly still.

For spawning my projectiles, I have a server-side RPC that takes in the transform to fire from the client: 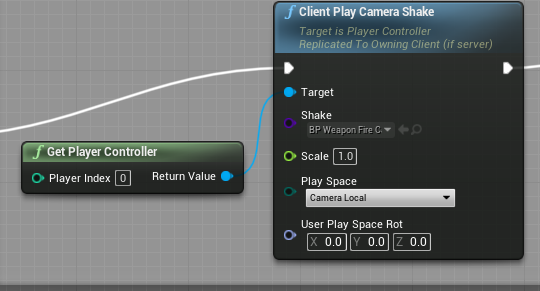 Any ideas? I did some experimentation yesterday and I believe I found that the camera shake wasn’t actually moving the camera rotation values, even though it quite obviously was shaking violently in the game. I’m not sure though. I think at one point if I removed my setting for my camera to match my controller rotation it seemed to do something, but that completely breaks the gameplay for me. I was hoping doing this via the GetPlayerController and ClientPlayCameraShake would fix that, but it didn’t seem to.