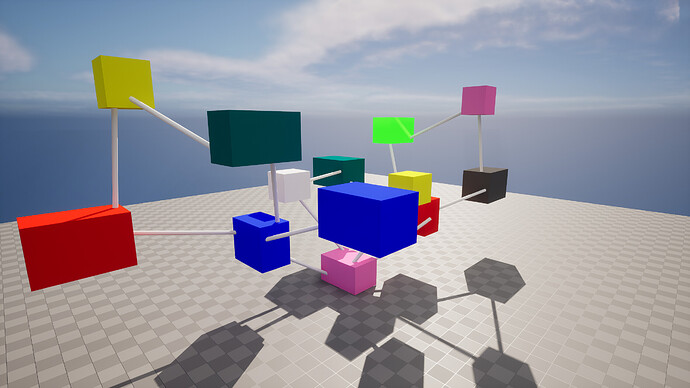 Lately, after playing around in VR, I’ve been fantasizing what it would be like to Visually Script in 3D with Blueprints. With or without VR. Orthogonal Views would allow the BP3D Nodes to be viewed like traditional BP2D Nodes. Could probably even have some form BP3D to BP2D conversion, visa versa.

I also imagine playful Gamification Mechanics that are invoked when one deletes, adds, orientate, connects BP3D Nodes. Something Simple like Enemy UFOs swoping in shooting missiles at your BP3D Nodes/Wires and you can point and click to Zap them to Score Points. Could probably be Motivator when Scripting gets tough. Of course Undo/Redo functionality would be there. Haha. Perhaps a new game genre? Utility Game?

Just a fantasy at this point, but I truly feel Blueprints in 3D would be fun, immersive, and coherent with all the other work we’re doing in 3D Development Environment. I definitely want to hear what others think about it. Please share your thoughts. Thanks for reading. 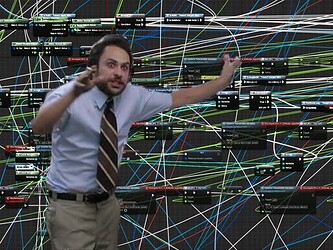 I’ll just leave this here for nostagia if nothing else.

Seriously, we will see things like this soon anyway thanks to the MetaVer$e. That is, if Web3.0 doesn’t just turn out to be a whole lot of Luna(tic) / Bitcoin hits 1-million / insert favorite NFT-forever snake-oil here and so on.

Riding the roller-coaster of BP spaghetti here & here would be interesting, or maybe it’d just encourage devs to create more nightmares IDK. Anyway, beyond that what would be really interesting, is to have the ability to plug-in-sample-values into BP sub-circuits and immediately see what comes out before even running the code. Like a sort of PREVIEW, especially for complex dense pure-node sub-sections that aren’t easy to debug. This is something that Epic just don’t get imo. Instead of copying blueprintue like functionality on here years too late. Why not go further and make this functionality better overall (let users evaluate branches and see immediate results using sample supplied values). Sometimes its necessary to break out pure-sections of nodes into impure breakpoint-able code when things go badly wrong (bad assumptions). That’s something Epic lost by dismantling the whole Community-Tools projects section of the forums imho. Overall seeing spaghetti in action is worth a lot more than just offering snippets / static scripts. But hey the genius that is Epic’s engine team isn’t exactly the same genius that’s responsible for support on here sadly.