Having an issue where i want to use the animations for the mannequin on my models but when i try to export the ue4 skeletal to blender it is messed up in blender, bones are facing wrong directions and such. I used makehuman for instance and used the game engine rig and then did retarget which mostly worked, however things like fingers are mangled beyond recognition. I tried to straighten them out but they are twisted in ways the engine wont let me untwist it seems, Plus its hard to work on it with the giant tool covering the finger. Is there a better way?

There is a reference to this in the Unreal DOCS. The fingers also did something similar.

Retargeting animations for use between different skeletons.

I did already retargeted skeleton. It fixed most of my problems except the fingers. The reference unless I missed another one was to recursively set skeleton. Which has been done already.

Some of the screenshots of this tutorial are a bit misleading now because the new UE4 mannequin is not in T-Pose any longer but in A-Pose. If you read the full tutorial then you could see some issues with different poses later but if you look on the upper screenshots then it looks like it could work with A-Pose to T-Pose somehow (which actually does not). Seems like the screenshots of the final result are still the old ones (old T-Pose blue guy -> T-Pose squad) and it seems it was a bit easier with T-Pose -> T-Pose with the fingers because if you switch the translation retargeting from animation to skeleton then it usually does not fix issues with weird finger rotations any longer because the chance that the fingers are posed like the UE4 mannequin ones is pretty small.

Retargeted again but fixed the rest pose in Blender a bit previously (just quick for screenshot): 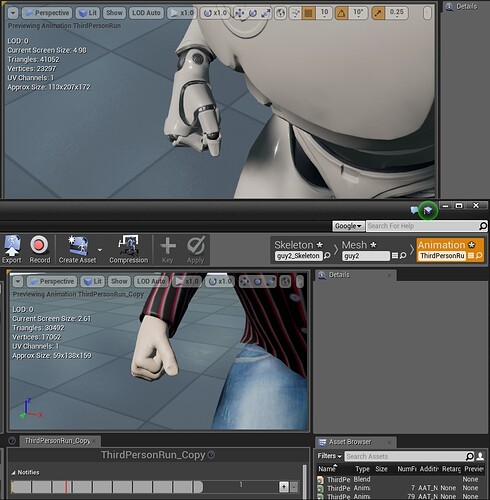 Edit: Usually the closer you get your rest pose in Blender to look like the rest pose of the UE4 manneqin the better the result afterwards.

interesting, i exported the mannequin into blender and put them inside each other and lined all the meshes up almost exactly. Then i locrotscale set it to frame 0. I imported it into ue4 and its 95% right. the left hand is decent… no where near as good as the mannequin but the right hand has fingers spun right around 360.
Images and Video:
[SPOILER] 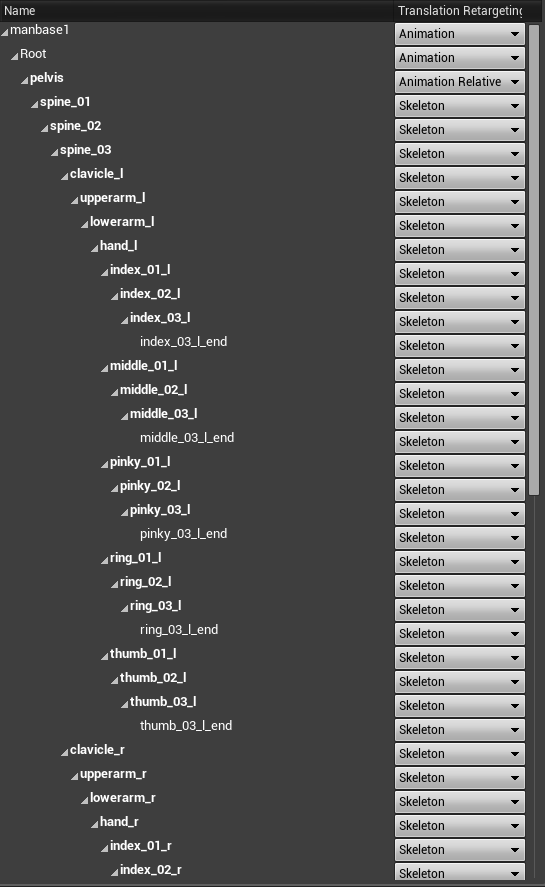 Just try it with other animations like the free anim starter pack. If it’s good with all other animations (and only causes an issue with one) then you should be ready to continue and do some more important stuff like adding some twist bones for upper/lower-arms, thigh and calf. It would be anyoing if you have to untwist your fingers manually in hundrets of animation afterwards but I think in that case it is just an issue with the running animation of the third person template and no issue with your mesh. So you could just untwist this one finger manually with the issue in Persona, add a new keyframe at time 0 and hit apply so you get a new additive layer track, export the fixed animation from UE4 as fbx and reimport it (get rid of the additive layer track).