I won’t post any screen shots as the event controller blueprint and enemy blueprints are mostly filled with irrelevant content, however I will explain it the best I can.

So, Blueprint 1 (from now on called Event) has an exposed array reference to the parent of a group of Enemies. When creating the event I assign which enemies are event related so when you have killed them all a chest drops.

The Event blueprints construction script has a foreachloop with the enemies array leading into it, and for each item in Enemies it sets a variable (reference to this event), so the enemies and event know who belongs to who.

This same method of scrolling through the list of enemies in the array is used a few times, for adding an overlay on top of the linked enemies in the editor by getting their locations and also for activating the switches to confirm if they have been killed.

This all works fine in PIE with no issues, and sometimes it works in Standalone (no idea why but I think it has something to do with how the blueprints are compiled).

After testing what is and isn’t getting fired it has revealed that it is the array of enemies set in editor/construction script.

Why would this be happening only in Standalone? 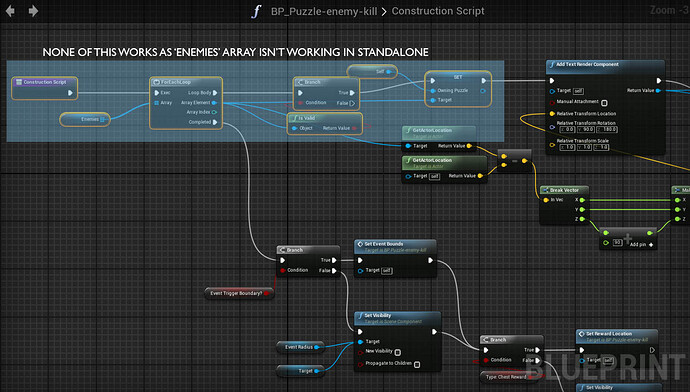 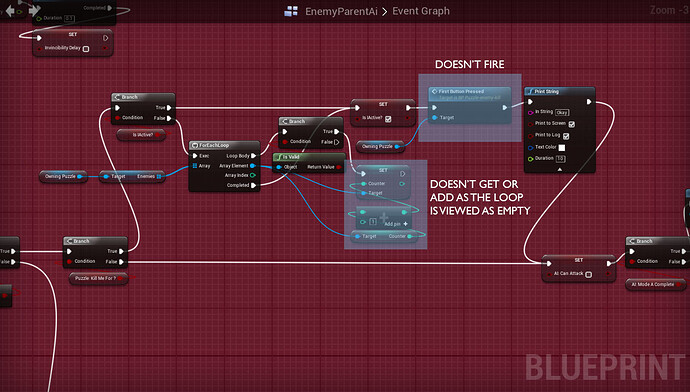 If I move all construction script content to Begin Play the same errors appear. It’s like standalone really doesn’t like interdependencies at all, seems to be to do with the compiler possibly?