Anybody having this problem?

I’m using a timeline to move an object in the world. I have it set to move 250 units on x axis and 125 on y, with a user curve on y. For some reason when I fire it, it never goes to the same location twice. Its aways off by a little at the end location, and its frustrating when your trying to be exact. Is there something I can do for this?

Can you provide a Picture of your BP and Timeline setup?

Hello,
If you use play, try play from start. Maybe you have a short interval each time when you finish. If it does not solve your issue, a pic of your set up would be great to help you. 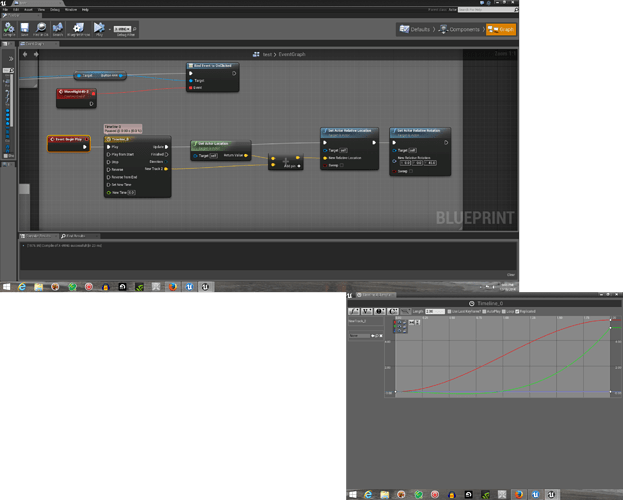 I did some tries and i saw the same difference, but i did not find a way to solve it in your situation. In case of no one have a solution, you maybe can use a float instead of vector with your positions start and end set, but only if you can do without your different curves. If you have a particular movement, you may can use a spline too. If you don’t have answer, then asking in answerhub will may be a way to have a reply too.
Editing

I saw a post you had on moving along a spline, but it didn’t work right for me. Any way you could show me how to move along spline hitting all the points with a box mesh? I need my actor to move in a curve\arc\rainbow shape, and be facing the new direction at end of arc.

I remembered another thread where i gave this example which may work for you too : 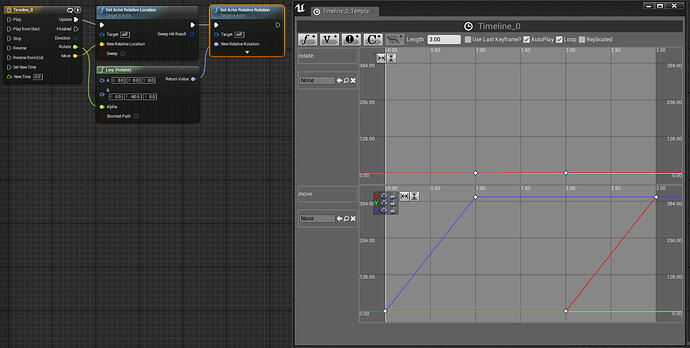 If it does not, i’ll do a spline to help.

Edit : values of x and y vector are units from origin of blueprint to end point (but i may have add a box as root to not have the blueprint moving) and rotate was a movement from second 1 to second 2 only which was from 0 to 1 but not visible on graph.
Link of the original therad if you want more infos : Timeline Issues - Chest lids behaving weirdly - Blueprint Visual Scripting - Unreal Engine Forums

You mind showing me the spline way to? Going to try both tomorrow, have to crash now. Thank You

Here it is. At first, thank you ^^ You made me discover new nodes i didn’t know which is really cool (maybe added recently or maybe another blind fen thing ^^).
What i did is migrate Bp_Spline_location from content example to my project (if you have issues doing this, check engine versions, i couldn’t import content to one project which, i realised, was not updated), i added a static mesh and i changed the final node by using “set world location and rotation” with target spline (mesh) which is really cool node. It does everything itself ! ^^
Then i set blueprint in level and created spline points (right click on first point : duplicate point / drag it. You can set curve /linear movement too like that).

nice!, Fen, been looking at splines recently and I can see your pic too, so many times I can’t see them on my monitor

I luv finding stuff BPs seem to do automatically for you, even tho you would never think it would. seems like almost every time I try to find some solution, I think there must be an easier way & there is. BPs ftw!

and this “blind fen thing” is that an infliction or is it contagious because I seem to catch it too, lol

so many times I can’t see them on my monitor

Next time it happens, don’t hesitate to pm. If i can, i’ll be please to help.

and this “blind fen thing” is that an infliction or is it contagious because I seem to catch it too, lol

I fear that it is contagious, lots of people on skype asking : You there ? You there ?

So do you have to use a particle system to get that timeline? Or can you make a normal timeline? What is the timeline setup? And can’t you also use a “get rotation at end lenght of spline” instead of lerp?

I used the one from content example for fast set up and particle was not used and could have been removed without changing. You can find it in content example blueprint_splines map but you can of course build yours. Timeline is a 0.0 / time.1 like, with two more keys added to smooth, i did not change the initial one. And you can use the set rot you want, create a second float output in timeline and use it for your rotator).

So with this setup, it should move object along spline path perfectly? Not like that timeline deal I had where it wasn’t stoping in the same place twice?

Afaik, yes. I had it on autoplay / loop and not seen any variation after some repeats. Same for the one before with vector timeline setting. I did some tries for the original chest needing and i didn’t notice any difference after loops. Sadly, i regularly do mistakes too ^^. If you notice one, please come back and we’ll try to rectify it.

Ok no matter what i try, the thing goes way off into space. Tried every node, every combo, and different components. I don’t have that last node you used. i"m using 4.5 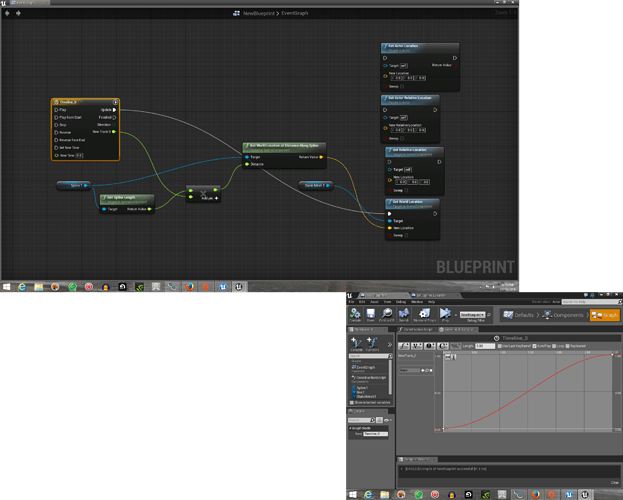 I’ve just do a try with a 4.5 project using “set world location” ( target is scene component linked to staticmesh1) and it works fine but by comparing with your picture, i saw you didn’t set the billboard as root, what i didn’t think to mention as it was automatic in migrated blueprint. Now it would be ok.

Even if i migrate the BP is still doesn’t work.

Ok wait a min something worked here. I used migrated and its working, but if i build my own it doesn’t work.