Another Blender to UE4

Hello, my name is Jerry, and i’m a total N00b to the Unreal Engine, so expect some really lame questions.

I have extensive content creation experience with modeling programs such as 3DCrafter and Blender. I’m starting to export content to UE4, and i’m slowly learning how things go in the engine.

I have attached a photo of my latest project, a C30-7 locomotive that I have exported from Blender. I have figured out how to to get the shapes in the game, how to make them children of the main Actor, and so forth. My current issue is a problem with animations. In Blender, and in the game that this locomotive is a target for, there a a lot of different parts that are animated, most of them doors that open and close. Now I have never used bones or skeletons or whatever for animation, as i’ve never had the need for it as I do not do organic shapes. So, how am I going to go about animating the hood door (yellow highlight) to simply open and close on a pivot? 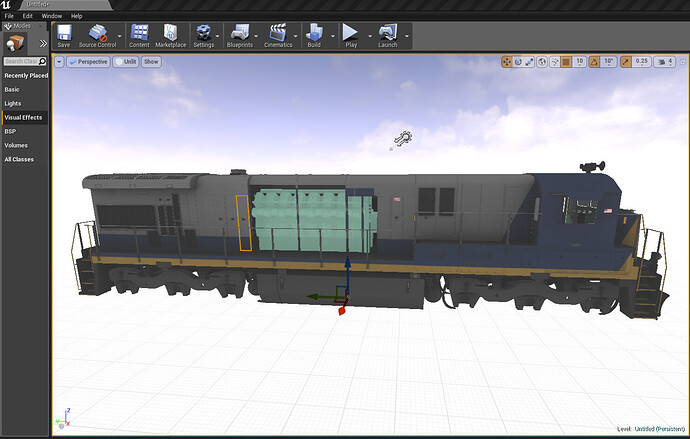 animating the door to open and close by turning or other simple movements doesn’t require the use of rigging/bones/etc. in blender. I suppose the door is a static mesh and seperated from the rest of the train. So you could turn the door mesh into a Blueprint actor. Then create custom events like ‘Open’ and ‘Close’ which triggers a Timeline that updates the rotation of the static mesh component, i.e. the door mesh. This requires that the origin of the mesh lies at the pivot point. If this is not the case, you can update your static mesh in blender or create a scene root component which parents the static mesh component and lies at the pivot point.

If you need more information, feel free to ask.

You are correct. The origin of each door is in the pivot point, and in Blender and the game the loco is exported to, the door is animated simply by rotating the pivot.

As far as placement of animated parts, in Blender, each part is root. I’m thinking in UE4 they should probably be parented to the main loco body before animating.