Hi guys, I’ve posted an addon for Blender I did, in order to improve my workflow from blender to Unreal engine.

Note that I am not a programmer so the code probably is not very polished, but it works and is Free!

These features do not add any new functionality to blender… But simplify some things , at least for me. I hope that help you

BTW: I changed the name of the addon, now UE4 tools, a clearer name If you have any questions, suggestions or complaints, do not hesitate to contact with me, I will do what I can, but no promises;) Looks very nice, I’m already lost within Blender so having some of the process automated should help me out a lot!

I had to actually pay attention in order to understand you, but with full focus I believe I caught every word you said. I appreciate your efforts in putting these videos up in English.

Subscribed to your channel to catch any further updates, thanks for the tools.

Thanks, hope you can understand everything. If you see that has problems because I did too bad, you can always read the documentation and help with the images of the videos (I used a translator for the documentation so I guess it’s better)

very interesting, i was looking at how to batch rename content in blender, hopefully it will work on rigs

I update UE Tools addon for run in BLender 2.72. You can download form the Main Page:http://bit.ly/Z3JrXV Greetings!

Hi Geodav, I’m working in a new feature for the Addon for add an armature from the HeroTPP (Witch I consider the “standard” armature for UE4) but with Ik/FK/ and some controls and properties for the rig.

I think can be useful too for many reasons, avoid re-target in UE4, easy animate new character with the “standard” armature, or just for create a basic animations for the blue guy for testing proposes (my case)

So I’m digging the python code for bones and armature and I know how to do the batch rename for the bones, but for what propose you want this feature?

BTW: Sorry for delay (bad moments on my life but I’m back!)

BTW2: Would be a problem if I include the blue Guy Mesh with the addon? my idea is have the option for add the armature or the armature with the blue guy because in the future I think I can create something like the plugin for Maya , for adjust the bone positions etc… and create new characters, and the blue guy seems perfect mesh for this propose

These new features work for other armatures too, basically I add a rig and controls for the rig to the “standar” skeleton from the HeroTPP, and some buttons for only export the “deform” bones only along with the character or the animations. For other armatures , I add a feature for recognize the “deform” bones automatically (search for bones that deform some vertex) and other for mark the bones you want to export manually. Also some tools for create and remove actions from the 3d view.

Someone at epic can tell me if I can release it with the blue guy mesh? if I distribute the addon with the new features I also need distribute a blend file with the rig and the hero Mesh (of course for free, like now).
I need request permission form someone or somewhere? 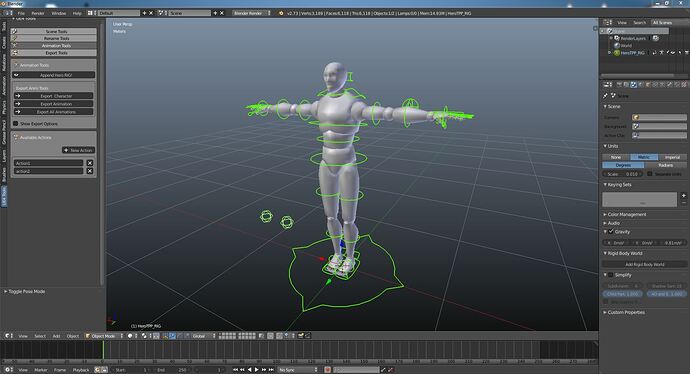 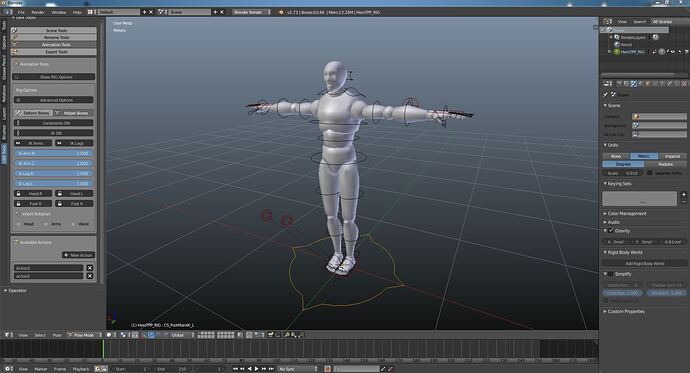 I have a problem with faceted objects, looks like normals are smooth after export, can you check please?

btw, I am using this on daily basis to export, nice addon!

Hi TDoro](https://forums.unrealengine.com/member.php?306-TDoro), the addon Export the objects with "Smoothing " = Faces

I never thought it could be useful to export the object without the smooth faces, but of course …normally I not do low polygon art and stuff like that

Give me some minutes , I will include a check box for use Smoothing faces or not on export options

Can download from the main page or use this [direct link](http://www.lluisgarcia.es/downloads/ue_tools1-1(blender 2.72).7z)

The check box is under “tangent Space” option

Thanks for notice me you problem !

Thanks Lui, I will update asap!

Does this autorig characters similar to the ART tools in Maya?

Lui, the link point to old file, which is identical with last version, did you forgot to update the link?

Hi** HeadClot**](https://forums.unrealengine.com/member.php?260-HeadClot) With the animation tools I basically want quick way to load the "standard skeleton " for use the included animations by epic with other characters and something for export only the bones that deform geometry and not the whole rig…Also for create new anims for tests etc with the blue guy

Today I will resume work in that direction, I have been a couple of days with PC fans molten, and I could not test anything in UE4.
I had problems with the roll of the bones, but I think this is solved and that the animation can now be exported correctly when the “standard” skeleton is used

But Yea, I was thinking in do it some tools similar to the tools in maya, for create different characters and skeletons from the same rig with sliders and all that stuff for readjust the bone positions with sliders or something… no idea how or what to do … I need revise all videos for the plugin for maya.

First finish this then I will see, other thing that I have in mind and some tests done is a button for export a pre-made physical animation as skeletal animation.

Hi** ChrisTm**](https://forums.unrealengine.com/member.php?18114-ChrisTm) If I’m not mistaken, I think the version for Blender 2.72 also worked in version 2.73, at least I did not have any problems, if you have some let me know so I can fix if I can

BTW: Morning!
BTW2: Also I had in mind an option for choose what type of character append to the scene , first person or third person (really for now I have not seen the skeleton on first person but I suppose is similar if not identical, to the third person skeleton

@Lui, For sure you did not update that archive, is the same like old version compared bit by bit. I’ve also put that in Blender and the new stuff don’t show up. Can you recheck please?

TDoro](https://forums.unrealengine.com/member.php?306-TDoro) You were right, sorry, now the file is updated on the server, I added letter “b” to the name of the script (ue_tools_v1-1b.py). (the compressed file has the same name)

Thank you so much for this! Before the newest update it was unusable for my low poly purposes because of the smoothing issues, but the latest update fixed it all. Excited to be working that much faster!