I am watching it I don’t remember which timer, I doing that frm new. And it always happened the same:
“Accessed None trying to read property CameraPawnRef”

If someone could look what I did frong I would be so happy! 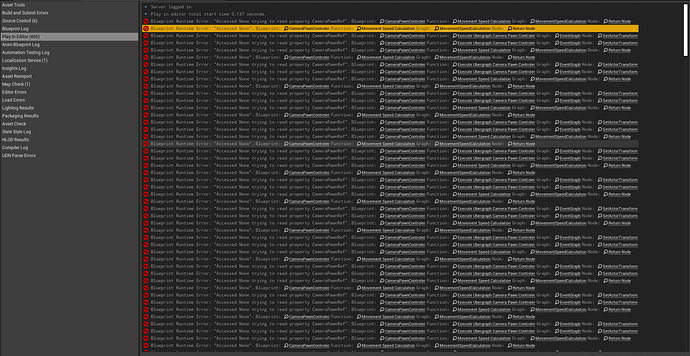 Thanks, many thanks!
T.

Sorry to hash up an old post but people still seem to struggle still with the concept of an Access None so I figured I’d answer a subscribers question, albeit an old question.

Hey T, better late than never but I see this never got answered here. Go watch my tutorial on Access None. I do my best to explain it in there with examples. This error means you haven’t instantiated the variable, that is, you haven’t put an object inside the variable for it to reference. Think of it this way: a variable is like a car. You tell the variable it should be of type Toyota. Well, the variable knows it’s a Toyota and because we defined a Toyota to have a steering wheel, 4 tires, red paint, car seats, windows and mirrors then that means the variable can see all that information about the Toyota. However, you can’t actually drive the car until you get it. That is, you have to put a SPECIFIC Toyota into that variable so it knows that is the specific Toyota you are talking about.

Same thing, it knows what the CamerPawnRef should be but until you actually put the CameraPawnRef in the variable, you can’t access it. Hence, Access None.

Watch the original videos closely, you are missing the part we do that.