Is there anyway to abort an animation/state within an state machine?
I have created the following state machines in an Animation Blueprint: 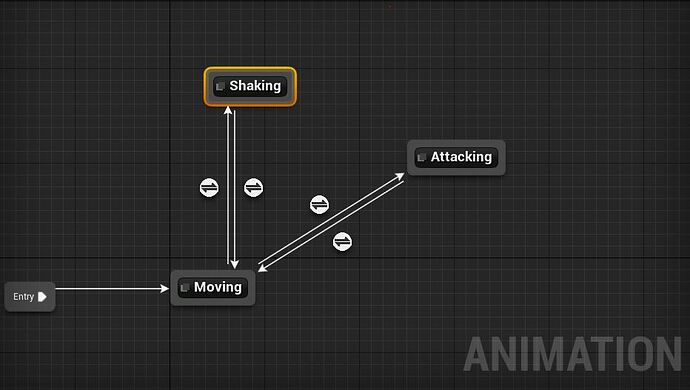 Does anyone know if this is possible?

Within the character blueprint (which is using this BP animation) the shaking state gets set randomly, but as soon a target is within sight the Attacking state gets fired, which means that it can happend in the middle of the “Shaking” state.

Thanks for any tips!

Ha! I do have the same doubt. Waiting for an answer.

In the Character blueprint the AI can attack and chase the player. In this case I don’t want to stay in the current transition. So in the transition itself I check the value of these variables.
The variables are updated by the Blueprint Update Animation event:

I managed to solve the problem in my case. Hope the answer works in your and others case!

I’m sure you’ve moved on from this problem by now, but looking at the top image I see a lot of “== true” nodes. Those are redundant. Their output will always be the same as their input, so you can get rid of them and just connect all of your boolean inputs and outputs straight to the “OR” node.