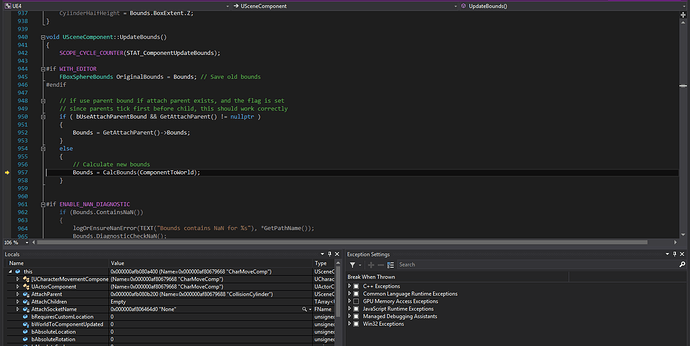 After not being able to find out what it was, I tried to recreate the problem on a new project. Problem is, once I create the new project, it wont even load the UE4, it will automatically crash with this :

Which I’m guessing looks something alike the same problem. The crash kept happening and a pop-up was opened regarding contacting the UE4 help desk. I emailed with the issue, and they responded that I should post the question in here since they only deal with launcher problems. So here goes nothing! if it doesn’t work I guess I’ll have to re-install ue4 and see if that fixes it.

This is quite the odd one, not often that we see crashes when creating a project based off a particular template. Could you reproduce this crash again and copy/paste the entire callstack listed in that window into a text file and upload it here? There are some bits of the callstack that are being left off, such as the line numbers for those particular functions/files, that could be useful in tracking down why this is happening.

So I just went ahead and re-installed the engine, so far no crashes, if it happens again, I should be able to narrow down what it might be related to. Thanks anyways for the answer! I’ll be writing another comment if anything.

Glad to hear that it may be fixed. I’ve changed your comment to an answer for now and will leave this resolved. If you do experience any more issue, please let me know and the question will reopen.